Alfie is a 4 year old male Cockapoo. He is neutered, vaccinated and microchipped. He will be Flea and worm treated and leave with a lead, collar and harness. Alfie’s owners had him since he was a puppy and surrendering him into rescue was by far the hardest decision they have ever had to make. He had been their baby for the past four years and they have managed to live with his resource guarding issues until their circumstances changed very drastically. 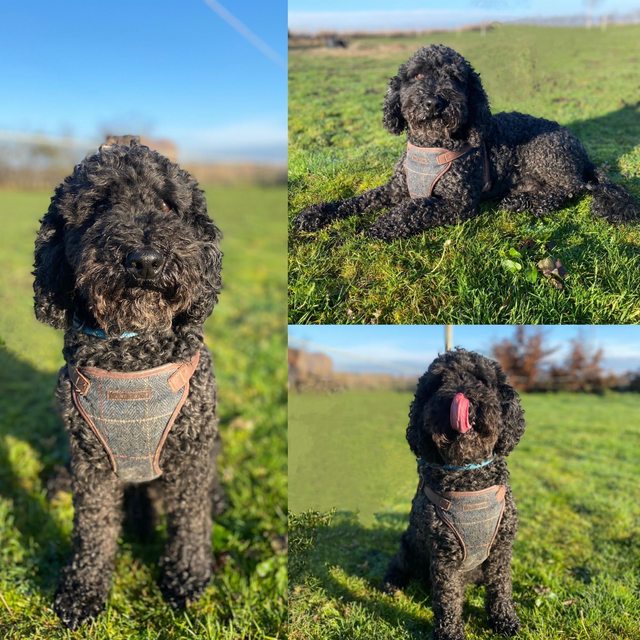 Alfie’s family recently had their first child and although they knew there were issues, they hoped they could find a way to make it work. They used a behaviourist to see if they could get on top of the issues before their baby got to the point of crawling and becoming more mobile, but found Alfie becoming increasingly protective over the baby/moses basket to the point that he would guard the baby from them and on a number of occasions Alfie had lunged often with no warning towards the wife while she held the baby on the sofa or tried to bite her when she was trying to make the baby laugh. He lunged at the wife as well when she was trying to burp the baby.

These have been concerning events and have made the wife extremely anxious with the baby to the point where she would just take the baby upstairs to be away from Alfie. His family felt that if they were to keep Alfie as their baby grows up, there is no way they could guarantee that the baby may not get bitten or into a unwanted situation with Alfie. They also didn’t want to have to lock Alfie down and restrict him to the point where he ends up getting even worse and more difficult to deal with.

It was their opinion that although they felt he was generally happy with them pre baby, he is no longer getting the attention he needs to be a happy dog and unfortunately while they have a young child who requires more attention they cannot offer Alfie what they were able to before and this is why they are seeing a worsening of his bad habits.

They also did not know how they could successfully protect their growing baby and separate him from Alfie. They care about Alfie’s happiness too and would hate to have to lock him away in the kitchen or muzzle him. Behaviourist advised that this could potentially make him more resentful towards the baby and one day lash out at him. Alfie hates being separated from his people especially with baby gate where he can still see them.

Bites have occurred when alfie has been challenged over something he has stolen, he responds well to distraction tactics and can be lured away into another room with high value food for the item to be retrieved.

During grooming where he has not been happy with clipping or cutting his legs/paws. We are unable to cut his nails because of it. We have done training with him to desensitise his paws being touched but he will still attempt to bite when having his nails being cut.

Being stroked behind his ears/on the head he often will come up to you and look like he wants the attention and suddenly snap/bite, especially when you look away. Vets believe this is caused by him having a bee sting previously that he associated pain with. Whilst the bee sting is long gone, the trauma relating to it still stays with Alfie and at times he forgets that he doesn’t have to stop people trying to touch it anymore.

Guarding letters posted through the letter box. He will try to bite if you try and retrieve them. Being picked up. He does not tolerate this.

Alfie doesn’t bite but lunges at feet usually in the evenings. This stems from being given high value to treats in the evening when he was younger that he would then guard. He became reactive and even if his human moved a bit whilst being sat on the sofa he would suddenly lunge at their feet. In the end they stopped giving him bones to chew on or give him treats he cannot finish fairly quickly. Now Alfie lunges in the evenings but doesn’t bite. However this is now more out of habit.

He can also guard over something (food) that he doesn’t really want to eat – if he knows you want to pick it up. He cannot be left with food if he doesn’t Finnish it.