Billy and Buddy are 7 year old male Beagles. Buddy is his slightly younger, taller friend who are in an Oldies Club foster home in Mattishall, Norfolk, waiting for someone to offer them a permanent home together. They are absolutely fine to be left for a few hours occasionally, so long as they are together. But if separated, Buddy becomes very stressed, howls, and might wee on the floor or in his bed.

Although they are OK to be left for up to 4 hours occasionally, they wouldn’t want to be left on a regular basis, so wouldn’t suit people who go out to work full time. They are both really good with other dogs and they are living happily with the resident dog at their foster home. They are also friendly with all dogs when out on walks. They’re sociable superstars! They want to chase cats and so cannot live with them. 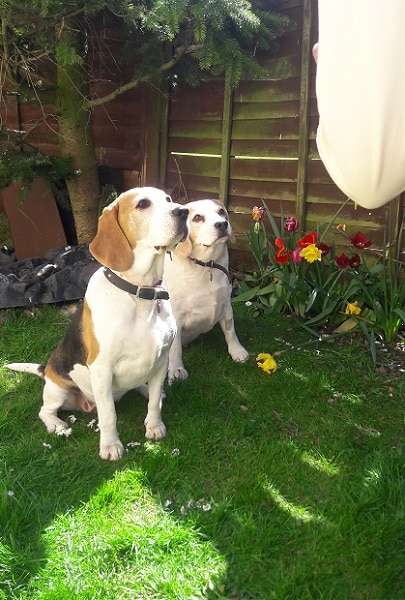 They aren’t living with children, but when out on walks they are friendly towards children they meet and are happy to be stroked and patted by them. Billy and Buddy should be fine to live with kind, sensible children aged 11 and over.

Billy and Buddy are enjoying two 40-minute walks each day, as well as occasional trips to the beach or woods. They are quite good on the lead, although they can be very strong if they see a cat. Buddy is easier to walk when he is wearing a halti headcollar. They’re not frightened of traffic or buses. 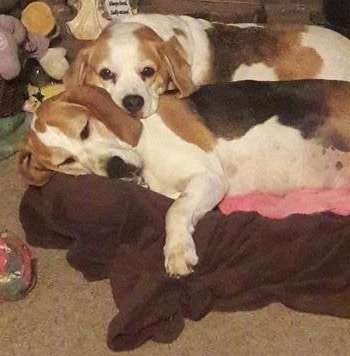 Billy can be quite stubborn if he is smelling something interesting and he will only be recalled when he is ready. Buddy is deaf so he has to be on the lead at all times unless in a safe, enclosed area. He will return to you if he sees you signal for him and he tends to stay close.

At first they were frightened to get in the car, but after a few visits to nice places they are now more than happy to get in. Billy is unable to get in by himself, so he puts his front paws on the back bumper and is then lifted in. 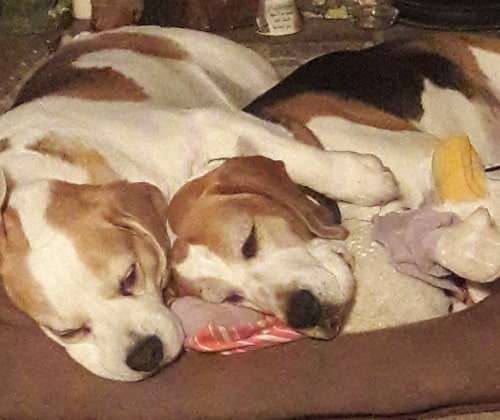 They both love to snooze the day away, either in their bed or outside in the sun. Billy dreams and Buddy snores! They love to potter about the garden and they get quite excited when it’s time for walkies. Buddy is vocal when he is excited. They both love eating, anything and everything, including soil. Nothing can be left on the kitchen worktops as Buddy will steal it, and he has learnt how to open a door. 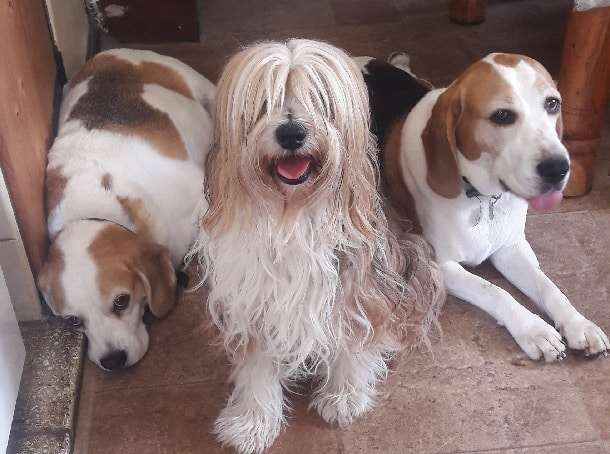 They can get very excited and loud about food, especially Buddy. Billy is on a diet as he was overweight, so they are fed in separate rooms. Buddy likes to play chase with the resident dog; Billy occasionally joins in, but he prefers to just watch! They don’t like cats!

Billy and Buddy need a cat-free home with someone who will give them lots of affection as they absolutely love cuddles. They’d like you to be around most of the time, or just working part time. They need a nice garden to potter about in. 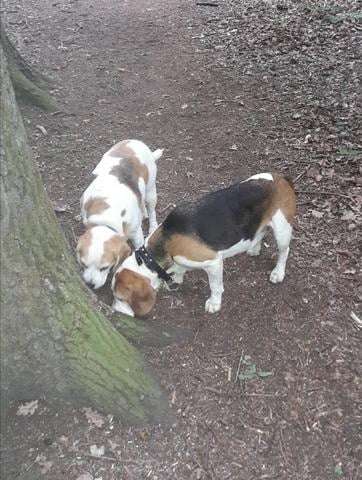 Billy and Buddy are neutered, vaccinated, microchipped and have been wormed and flea treated. Billy was overweight but has been on a strict diet and lost 10kg. He has a heart murmur due to a congenital heart valve defect. This has been investigated and the cardiologist said that he has had this from birth and does not require any treatment.

It should not get worse and does not affect his daily life. Buddy is deaf, but has no health issues other than a sensitive stomach and often has a very soft poo after the first, solid one. The vet said this is nothing to worry about.