Bingo is a 10 month old male Collie. Bingo has come into our care from another rescue after 2 unsuccessful placements. His owners were unable to cope with his energy levels, over arousal and breed specific requirements so surrendered him to us to find someone who was better able to work with his individual needs.

Bingo was adopted at the beginning of June, then shortly relocated after his family felt that they were unable to offer him the attention he needed, although described his behaviour and personality as brilliant and gave the rescue no reason to be concerned. His next family welcomed him home around 8 weeks ago and he was doing very well until he started to reach sexual maturity. This manifested in reactive outbursts outside of the home when being overstimulated causing him to whip round and nip/mild flash bite his owner’s legs when out walking. He did this on a couple of occasions, once causing bruising and another time breaking the skin. 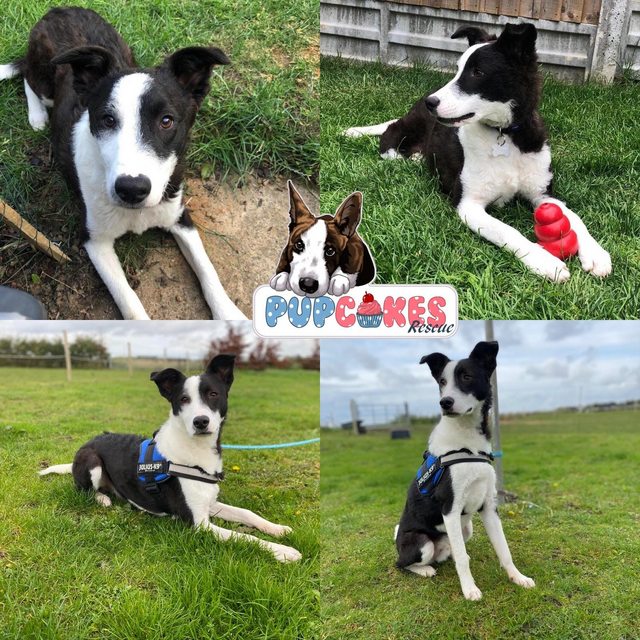 Now, let’s talk Border Collies. Can we all agree on something right here, right now? Every dog that is in a home, in a shelter, in the show ring, or anywhere else comes from someone that was breeding dogs for a purpose. It may be way back in the dog’s pedigree but it’s there. Hunting, fighting, chasing, pulling, retrieving, protecting, patrolling, killing…your dog laying at your feet right now has ancestors that did at least one of those tasks very, very well. Those instincts don’t disappear when they walk through your front door and become your family pet.

There’s a reason that Border Collies go in low and nip anything moving. Watch a youtube video of them working sheep!
Here’s the kicker…a border collie that goes in low and nips is probably the result of someone’s specific breeding. Those are intended behaviors in that breed. Understanding the propensity of certain behaviors in breeds and mixes will help owners understand where the behavior is coming from and how best to support it/work with it.

Bingo’s family worked with a behaviorist and they have implemented all the advice given by the behaviourist who’s been supporting them, they’ve taken him to training classes, given him 1-2-1 focus and sought professional help. They progressed down the route of exercising him as much as possible to keep him stimulated, but it was over stimulating him, they then went down the route of limiting walks and doing mentally stimulating games but that frustrated him.

Bingo needs a collie savvy home with a job to do and people need to accept that he’s a through and through collie that will at times struggle with his arousal and over stimulation. We’ve counteracted this by conditioning him to a muzzle that he wears out on walks in situations where he’s likely to be over his threshold. This in turn means that should he reach his limit when outside, if he nips or bites at peoples’ heels he will not cause injury and adopters will be able to safely move past this and work on redirecting his focus. This guy would excel at agility or some degree of scent work.

Bingo is a big, leggy lad who we have aptly nicknamed “legs 11.” He is a typical happy go lucky guy when he meets new people and is very social and friendly. Everyone loves him. Bingo walks well on the lead and enjoys being out and about. We were told Bingo was housebroken but he may require further work on this in his new home. Bingo is quite a vocal guy, he does this mainly to gain your attention when he wants something. He is happy to be crated and does not appear to have any separation problems when left.

Bingo is a typical Collie, he is strong willed when he wants to be and a tenancious character, he absolutely loves learning new tricks and is so very smart. He has a pretty good level of basic obedience and knows quite a few tricks .
Bingo absolutely loves other dogs and plays well with dogs of all shapes and sizes. He can get over stimulated with play and “jab” at them which again is another Collie trait. We really think that Bingo needs to live with another dog as he takes a lot of confidence from them. We feel this may help him redirect his pent up frustration on something other than his humans and instead have a friend of similar energy levels to play with.

Bingo can be quite wary of doorways, gates and anything that he has to pass through, with confident encouragement or another dog to lead the way he tackles these obstacles much better.

Tweet
Previous
Next
Tags:-Dogs for Adoption in Midlands Good With Older Children Suitable to Live With Other Dogs