Boy is a 7 year old male English Setter. He is currently in the UK and looking for a new home. He has been with an absolutely wonderful family for a year now but they have made the heartbreaking decision to rehome him. I’ll let them do the talking on this one: I want to write this to tell you a little bit about Boy. He’s a wonderful dog in so many ways and it’s breaking my heart to be looking for a new home for him.

Boy loves adults and seems to relax in their presence. When he trusts you, he will seek out affection, smothering you with kisses and rubbing his head on you. He loves lying on a sofa having his head stroked and his chest rubbed, but watch out: if you stop before he’s ready, he’ll grab you with a paw to keep you there. Boy makes it really clear whether you are welcome to cuddle him. He’ll lie on the sofa or by your feet with his tail thumping, raise his back leg and stare at you with his big, sad eyes. He’s completely irresistible. If Boy isn’t feeling confident, he’ll roll himself into a tiny ball in the corner. 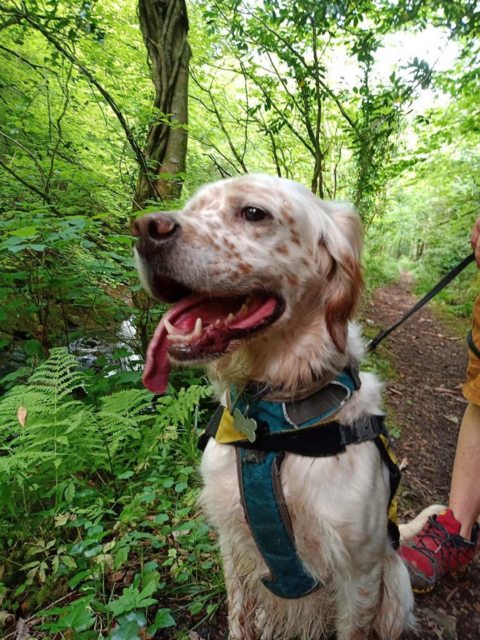 Boy doesn’t understand toys. I don’t know what he went through in his previous life but he seems nervous of them and often turns his head away if you present them to him. However, he will play with rubbish. I guess he feels that’s allowed. He enjoys it when I fill a small box or a toilet roll inner with food and stuff the opening with newspaper. He’ll rip it open and find his food, then keep on ripping till the cardboard is in shreds. He also likes a low cardboard box with recycling and food for him to snuffle in. Recently, he’s started engaging with filled kongs and food hidden under cups. With that in mind, he needs reassurance before he starts or he will just leave it and walk away.

Despite everything we have tried in order to build his confidence, Boy is still very anxious and stressed on walks. When he’s in places he seems to associate with hunting (woodland and big open spaces such as moorland), he becomes frantic. He goes into ‘hunt mode’, tucking his tail between his legs, pulling and constantly moving from side to side, always scanning for birds. It’s like he’s terrified of the consequences of missing a bird (maybe he has a good reason for this.). In these situations, he won’t eat and often won’t drink, showing his level of stress. We now avoid these places as it’s no fun for anyone. 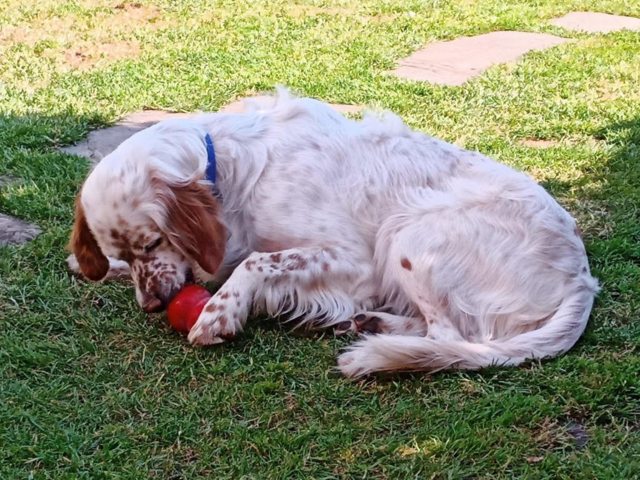 However, he does love going out. When he sees shoes being put on he will run around, stand on his hind legs and wiggle his whole body. Boy’s favourite exercise is running. If he spots someone wearing lycra on the landing he will make an odd moaning call to them from the bottom of the stairs until they come down. It sound like he’s telling you to hurry up. Boy’s an awesome running partner. He will pull you up the hills (and down them again which can be a little nerve-wracking!). He’s knocked a huge amount of time off my personal bests. When he runs, he doesn’t hunt. It seems that it’s so remote from his working life that he relaxes. He pays close attention (something he doesn’t do in hunt mode!) and slows down and looks at me when we come to roads.

Boy also loves an enclosed field. We pay for him to have time on his own in a totally secure field and he loves it. His tail is up, he runs, jumps over tyres, climbs obstacles, and rolls and rolls in the grass. He particularly loves it when I run away from him calling his name. He chases me, turns on a sixpence then throws himself on the ground in front of me for a cuddle. He loves running along walls and fallen trees and jumping over rocks and tree stumps. I expect he would love agility if you can find a one to one class. 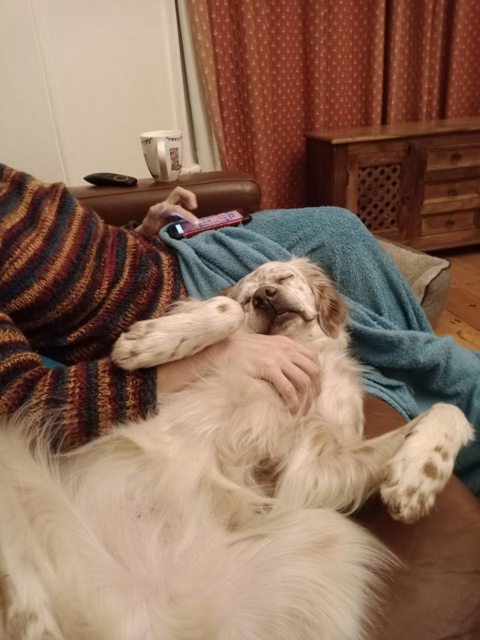 In terms of regular walks, he does better walking around streets and in lanes, especially narrow lanes with high banks. Again, I think he associates these places less with hunting. Of course, if he sees a pigeon or crow on the ground he will stalk it, refusing to move until it’s flown off. It can be frustrating but it does provide a break. On these walks he does pull. I find that if I stop walking, he will walk back towards me as he knows I won’t move if the lead is tight. Walks can be rather jerky as he knows he’s not supposed to pull and is trying to control himself. When he’s walking in these places he acts more like a normal dog, spending time sniffing and marking. He very rarely wees on the moors and if he does, he keeps moving at the same time.

Boy does really struggle with other dogs. We avoid taking him to places where dogs are running off lead because if a dog runs up to him and greats him face to face, he will snap. I don’t know if this is because he’s focusing on hunting and doesn’t see them until they are close and it frighten him or whether he views their attempts to play as an attack. However, if the dog ignores Boy, he will ignore the other dog. He’s not one to lunge and bark at a dog.

However, I do believe Boy would benefit from being with a calm, low energy dog. He has learnt to tolerate my mum’s lazy female Labrador and on a walk, they have been face to face with no incident. He mostly ignores her on a walk. In the house, seems to learn from her. For example, over Christmas, they were together for a couple of days (always supervised). Whenever she barked at a passer-by, Boy would look from her to the window and join in. He’s never done that before. In fact, if you want a guard dog, he’s rubbish. He will follow a workman round the house looking for cuddles. If Boy were to be with another dog, I would suggest a very slow introduction with something like a baby gate between him and the other dog so he would learn slowly to see the dog is no threat. 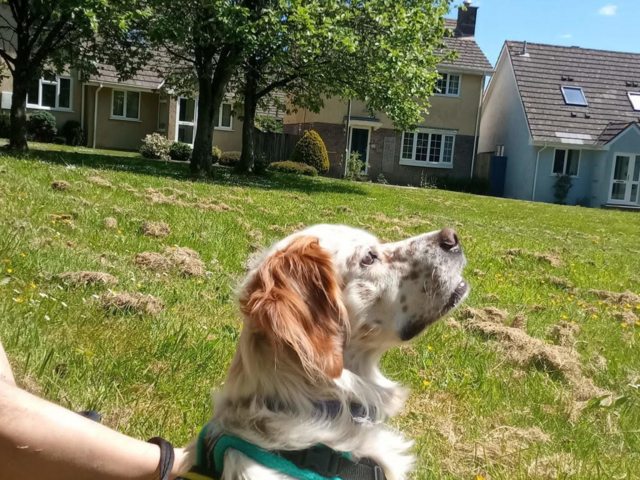 Boy is nervous. He doesn’t like sudden noises or movements and will cower if a fork falls from the table or a bag he is next to moves suddenly. However, household noises like a vacuum or lawn mower cause no problems for him. He’s not keen on bath time and I tend to get in with him. He doesn’t like enclosed spaces. He won’t enter the porch of the house until the inner door is open. He’s made huge progress with kissing gates and as long as he can see that he can get through, he’ll give them a go. He also seems to be afraid to let himself go. There have been times when he has started to zoom around the garden only to stop suddenly, run back inside and curl up in a tidy ball on the sofa.

He’s really good at his basic commands (except coming back when off the lead! That’s a mistake I only made once.) We took him to puppy training classes to try and help with his socialisation. Everyone was very impressed with his ‘down – stay’. He simply fell asleep. He doesn’t have any issues with separation anxiety. He’ll watch me leave from the window then goes to sleep on the sofa. I’m not convinced he moves at all as he’s usually slinking off the sofa and having stretch when I return. I then get the most wonderful whole body wiggle when he realises it’s me. Boy is fully toilet trained. We tend to let him out at 10pm and he’s always clean and dry when we get up after 7. 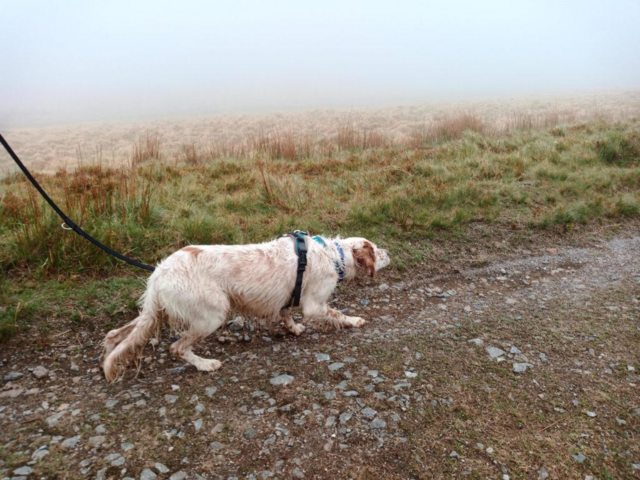 Boy has had a few issues with his weight. He arrived with us underweight and it took a long time to get his weight up. He would eat voraciously at times then refuse to eat for a couple of days. When he wasn’t eating, his stomach wound make loud gurgling noises and he would be miserable. Then, over the first few weeks of lockdown, he quickly lost weight again. We thought it might have been stress related, suddenly having everyone at home instead of just me, but we wanted to be sure. The vets took bloods, urine, tested his thyroid and did a full scan (hence the short hair on his abdomen). All came back clear and the vet remarked on his excellent health and suggested he was probably younger than the 7 years on his passport.

The vet suggested treating him for chronic pancreatitis. This is simply giving him a low GI food and avoiding any fat (no more cow snouts or pig ears for Boy!) It seems to have done the trick. His weight is up and he’s eating consistently. We give him 4 meals a day (some in his bowl and some as games) because we wanted to make it even easier for him to digest.

Health wise, Boy does have a few lumps. The vet has said these are harmless fatty deposits. He also has at least one more piece of lead shot in him (we had one removed thinking it was a grass seed.)It won’t cause him any harm but does give an indication of his past life.

You are probably wondering why I need to rehome a dog I clearly adore. If I wasn’t a mum, I would keep him without question. Unfortunately, even after a year, he is very wary of my 7 and 11 year old daughters. We have tried everything to build a relationship and at times I have thought we have been making progress but then we are back to square one again. They are generally calm and quiet girls so I don’t know if there has been a negative experience in the past but although he will come up to both of them and lick them, he doesn’t like it when they approach him.

Since lockdown, the situation has become worse. He has growled more frequently at them if they try to stroke him and has also growled at one when she tried to walk passed him. Clearly, there is something about them that is causing him stress. There seems to be no rhyme or reason for these events and I am terrified that this may become a bite. It has also reached the stage where the children avoid whichever room he is in. I’m certain that this general feeling of stress is making it worse but without being able to figure out a pattern on these incidents and predict them, I’m at a loss.