Cassie is a 2 year old female French Bulldog. She is the most adorable dinky little Frenchie girl and has come into our care because her family were struggling to control her aggressive outbursts. She is a sweet girl but has come from a home with children which we do not feel fully suited her. A lot of aggression was aimed at them and we feel that maybe she might have been quite scared and jealous of attention they received.

Whilst nothing was done intentionally to Cassie we do feel that loud and erratic behaviour has exacerbated Cassie’s aggressive outbursts and the reason for their manifestation. The end result was that she was incredibly reactive and volatile towards one of the children in particular causing her to bite on more than one occasion when the child approached the mother.

Cassie does not do well with contact aspects of her daily life changing and finds as sudden and loud noises distressing. A very busy household would be too stressful for her and a chaotic environment would cause her to go back on all the confidence she’s gained. 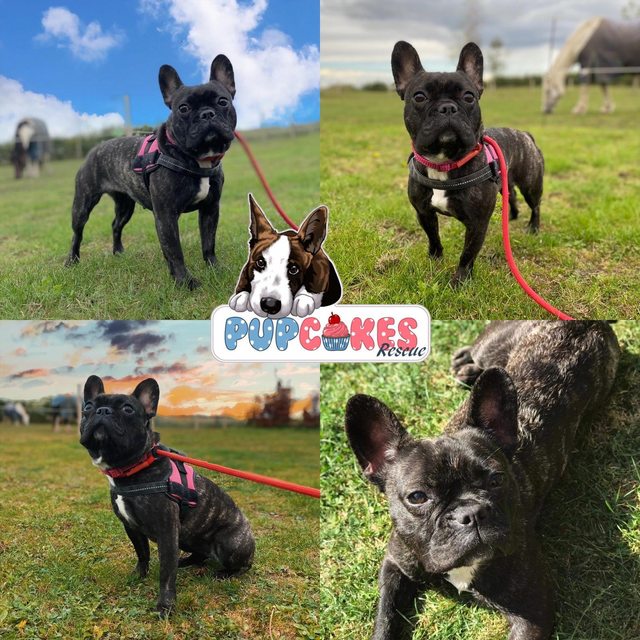 Cassie is generally scared of new people and this has been made worse by living with another reactive dog. Cassie has always been timid in nature and weary of strangers from an early age. Whilst her family have done their best to combat this she has not overly been pushed out of her comfort Zones due to fear of how she will react in new environments so has not come on a lot with meeting new people. Cassies has nipped a neighbor previously who surprised her suddenly, but the behavior generally manifests in vocal outbursts rather than volatile aggression.

We do believe this is coming from a place of fear in an unstable environment where she was struggling to cope with adjusting to things rather than an ingrained behavior. This is basically fear reactivity coupled with his fear of strangers. She will need training with people and a positive association will need to be built with new people entering her space. We can advise on this further with a training plan we have set out for her.

Cassie is a resource guarder who’s anxiety causes her to guard her human from what she sees as potential threats.
For those who don’t know Resource guarding refers to a dog displaying behavior (growling, snapping, etc.) intended to convince other dogs or humans to stay away from a particular treasure or “resource.” The resource can be food, treats, toys, a place (a bed or favorite chair), or occasionally a person.

Cassie has shown this behavior over her person and over her crate when faced with unfamiliar situations. Whilst Cassie is very settled in her crate and it helps visitors, potential adopters need to be aware she also has a capability to guard it from people she doesn’t know or trust.

Despite her issues she’s actually incredibly affectionate and in the right environment we feel she would gain so much more confidence. She is certainly improving here with the arrival of a confident handler. She takes a lot of confidence from the person taking charge. It seems Cassie’s previous home life did not suit her and despite everyone’s best efforts it just wasn’t going to work.

Cassie shares her suite with another frenchie and does well with them. She does guard her food from them at meal times so would need to be fed separately. She would be happy with another canine companion or as an only dog.
Cassie is good on the lead and enjoys strolling around although can bark at bigger dogs.

We are working with this by redirecting her focus and she’s responding well to it. She is incredibly food motivated so training her out of undesirable behavior is easier with something tasty. Cassie is an anxious little lady. As a result she is not sure how to cope with a changing environment and needs stability and routine with careful controlled introductions to new people coming into her space.

We are sure with further exposure and correct handing she will go from strength to strength as she already has here.