Charlie is a 6 year old male English Springer Spaniel, neutered dog who came to us 3 months ago following the breakup of his owner’s relationship (not sure how true this is because Charlie was in a terrible state). He had matted fur, huge clumps hanging from him, badly stained teeth, very long nails and was nervous and agitated. We had a couple of bad starts to his fostering because he would try to bully our dogs (and sometimes us) daily, until our oldest dog took him in hand and gave him a right shaking, this put him firmly in his place and he has not tried to dominate anymore. They rub along well although they will never be best mates. Oddly enough with our youngest dog who is a lot more docile, he has rarely had issues and looks to her for comfort now. He doesn’t like cats, but fortunately for us our cat is as hard as nails, not easily bullied and a fast runner!! Charlie has had a bad life; he was kept chained so has serious trust issues. He is very anxious, requires Prozac daily and is easily startled. 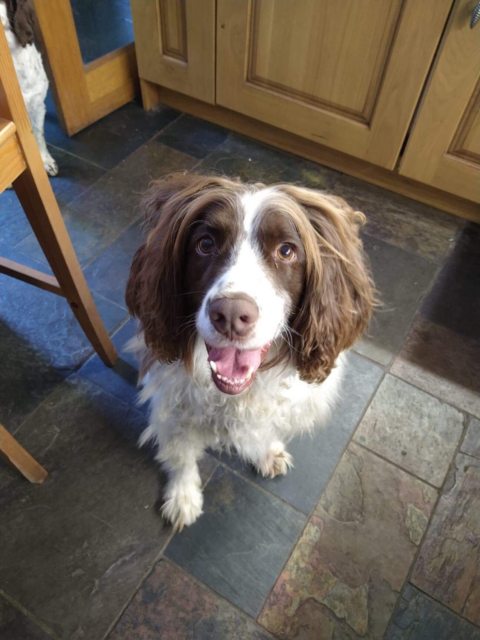 We needed the input from a dog behaviorist to guide us in the first few weeks due to his erratic behavior but in the 3 months we’ve had him he has shown great improvement, he is a different dog! He is not good around other dogs until he has had the chance to have a proper, controlled introduction, and if on a walk where other dogs are likely to be, he needs to be kept on a lead because he will choose fight over flight, especially if the other dog is inquisitive and wants to say hello (we think it is something to do with being kept chained, so he’s never had the opportunity to escape). We manage this by taking him to a friends farm where he has freedom to run which he LOVES to do and we also take him to a private dog walkers field where you can hire the field for your own private use, so no risk of other dogs. He thoroughly enjoys being off the lead and will spend all day chasing 2 balls (not 1 – because he will not release the ball he is holding, then you throw the second ball and he’ll drop the first!!). 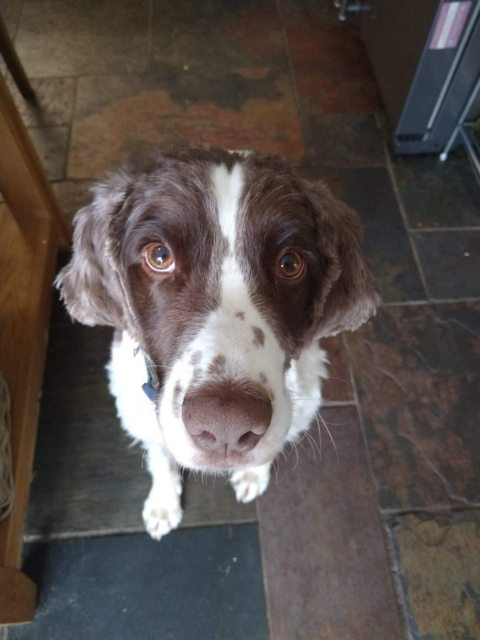 So, there’s a bit of an issue with resource guarding too. He has calmed a lot though and whereas he would be aggressive towards us when it came to approaching him mainly if he’s holding something, he now just looks and turns away if he doesn’t want to play, but he will tell you quite openly by giving a bark and wagging his tail when he does. His body language is a really good way to interpret his mood. If he goes very still, looks blank and drops his tail, then it’s time to walk away. By raising your voice happily, he will instantly change again, wag his tail and come to you for a fuss. There have been 2 instances where he has snapped for no reason and unfortunately on one of these, he bit our (adult) daughter who is experienced around dogs. Charlie finds it hard to trust. He will not come when you call him if a doorway is involved. If he’s outside you can’t get him in, if he’s inside, you can’t get him out. The trick is to walk away and let him come which is usually within seconds, but you can’t make him come, and if you try then he will get into defensive position.

Charlie doesn’t like the vet and requires a muzzle. This is easier said than done because of his trust issues, but through copious amounts of ham and praise we have managed to get the muzzle on him. Again, if there are other dogs in the vets he will try and attack them, so strong arms required. Charlie has only been on Prozac for 3 months and the minimum amount of time for beneficial effect is 6 months, the probability is that when the trust comes, and the anxiety reduces there is a likelihood that the Prozac can be discontinued – on the vet’s advice. He is fully up to date with his vaccinations, flea and worming treatment. Charlie loves the car – but you need to use a seatbelt lead because he will try to get in the front seat otherwise!! Charlie’s recall is good, unless something grabs his attention – a lot like our dogs!! For all the above reasons, it is clear to see that Charlie is a damaged dog with lots of issues, but after all that he is a lovely dog. He just wants to rub along with you and have a quiet life. He will be a challenge and will need a mature, experienced dog owner, with no children, no cats and possibly no other dogs, unless you are prepared to go through the introduction process as we did with our dogs, we had to put up a dog gate and leave them to spend time just milling around without stress and by sleeping around each other at night – for several days hence they became more familiar and not a challenge.

So, it’s not impossible but it takes time and patience. He will need someone to be at home at least half of the day, and prefers men to women, although we’re sure in time and when the trust comes this won’t be an issue as he comes to me for attention and playing whenever hubby is at work. So in summary, Charlie will need a confident, experienced dog owner who knows how to handle a dog with anxiety issues, sometimes (but rarely) unpredictable behavior, the ability to walk him in a quiet area due to his nervousness around other dogs, and to deal with the challenges of vet visits and being able to muzzle him. Will someone please step up to the plate and offer this poor lad a proper life. He is not an ideal dog (whatever that is!), he will be unpredictable initially and probably very scared which will bring issues, but, when he is settled, knows his routine and he gives that vital trust – he really will be a loyal, loveable and happy chappy, the rewards are so worth the challenges. In the three months we have had him, we have seen a huge change, and that will only continue to improve given the right environment and handling.

Charlie is neutered chipped vaccinated wormed and flead and adoption is subject to meet and greet and homecheck. Applications via forms section of website please.

For further details about adopting a dog from Spaniel Aid, please contact spanielaiduk@gmail.com Please note, dogs under the care of this rescue are rehomed across the UK and all dogs will be vaccinated, microchipped and spayed/neutered. Home check applies, and full post adoption support is offered.