Meet Coco, he is an older Collie cross male aged approximately 1 year old – this little fella is a very lucky boy! First he was found wandering as a stray and after 7 days found himsef on death row. He was pulled out of the dog pound on his 8th day and found a temperary foster home with a family for a couple of weeks. 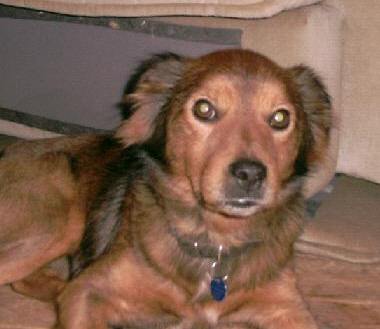 I was told about him and agreed to take him as soon as my two foster dogs went to their new homes (who were due to go last saturday). Both dogs trotted off to their new lives and the plan was that Coco would arrive on Saturday afternoon.
I then got a frantic phonecall from the transporter saying that she had called the foster carer to arrange collecting the dog and she was told that he had leapt the fence the day before and run off and hadn’t been seen again.

When the local dog was contacted it turned out that he had been there for about a week already and was nearly back on death row as he had nearly reached his 7th day! Needless to say, Coco was then collected again from the dog pound and bought here, safe at last!

Coco, we think has a bit of Collie and a bit of Spaniel in him, plus other breeds that we are still guessing at. He is a lovable and extremely affectionate dog and is good with other dogs, fab with cats and small caged animals and has lived briefly with children with no issues. He has made no attempt at escaping here even before he was castrated.

The foster carer did have low fencing though. Coco will need a home with minimum 6 foot fencing all the way around the garden. Coco does have one problem though. He has slight guarding problems, but we are getting through them. He has almost got there with food as you can see here… 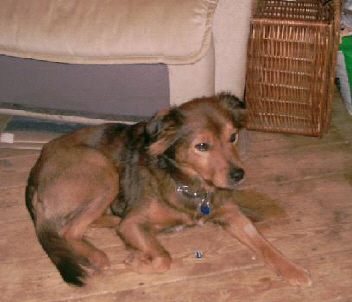 We are now working on toy possession, but I must stress that this isn’t severe and is just a glitch on his character! I am training him by allowing him a tennis ball to play with and keeping hold of a spare one. When he returns the first ball, then he can focus on the other tennis ball and eventually he gets bored of this game.

This is a great training technique because it is slowly teaching him that there is no need to guard. It doesn’t work with all possessive dogs, but does for a dog with only slight toy possession like Coco. Because of his little problem I will only be homing Coco with teenage children or an adult household (visiting kids are fine with supervision). Coco has been first vaxed, castrated and micro-chipped.