Cosmo is a 2 year old male Cockapoo cross English Springer Spaniel. He is very handsome and an absolute live wire! He is so sweet and affectionate and very “puppy-like” in his mannerisms. Cosmo has come into rescue due to resource guarding/snapping and because his owners did not have the experience to deal with the resource guarding which they felt was exacerbating the resource guarding. Cosmos owners no longer felt they could trust him following growling and snapping instances relating to his resource guarding.

Cosmo is a pretty standard resource guarder, standard stuff eg beds, toys. But one who doesn’t have any hugely obvious triggers but throws down with little warning very quickly when he decides to guard something. The annoying factor being that space is one of the things he has guarded and it’s virtually impossible to ascertain which space he will be guarding ahead of him doing so. Pre empting his behavior is not as easy as some of our cockapoos so the important thing is how it is handled rather than preventing it. 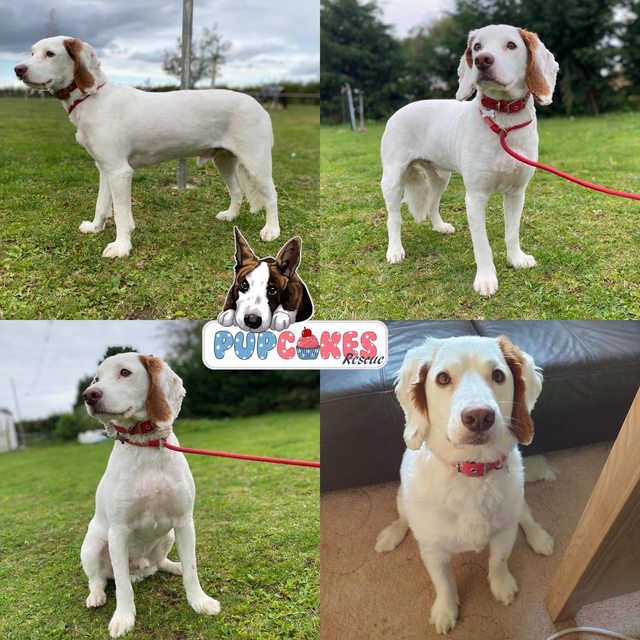 (Although we do always suggest with any resource guarder not to leave things around the dog can have access to, tea towels, paper, food packets etc and to be very careful around high value triggers like food, beds toys. Chews and long lasting things should be ruled out as they have high capability to be guarded and we recommend not allowing them on sofas and beds where they are level and higher to you due to the fact that they are more likely to go for your face should they lunge. They can also decide to start guarding the sofa whilst you sit on it. With a lot of space guarders they like to escalate from furniture to rooms so keeping furniture off the agenda helps hugely.

Cosmos behavior has not previously been dealt with and he needs to learn that guarding something has the opposite effect of what he is trying to achieve. Should he start showing any sort of guarding behavior a slip lead must be quickly placed on him with a firm “no” and he must be removed from the situation and put somewhere else to calm down.

If the reason for guarding was a physical object it can then be safely removed before he returns, if it is a smaller object he is holding onto then he must be offered a swap out for something of higher value and again removed from the situation. This may need to be repeated many times before it makes sense to him. Provoking, Caesar pinning and challenging a resource guarder will all end in you getting bitten. The trick is to deal with it calmly and swiftly whilst not reinforcing it and not exacerbating it.

Cosmo is the most loving boy who is so friendly and submissive with everyone he meets, he has not shown any aggression or evidence of resource guarding since coming into our care. He takes a lot of confidence from his handlers and likes to know where he stands. We will only be accepting applications from people who are experienced dog owners as it would be a shame for this boy to be mishandled at this crucial stage and for his resource guarding to manifest into a much bigger problem.

Cosmo really enjoys the company of other dogs and enjoys running around with them. He does not show any evidence of guarding his stuff with other dogs and we think he would like to share his home with another playful companion of similar energy level but alternatively could live happily as a solo dog.

Cosmo is quite unruly and does not appear to have had a great level of basic training. He pulls heavily on the lead and jumps up a lot but knows sit and down. He is very smart and willing to learn and would benefit from some general politeness training and puppy training classes.

We feel that Cosmo might have more of a cockerpoo coat but he arrived completely shaved so we have no way of knowing what his coat type is. People will need to bare this in mind as we cannot guarantee he will be hypoallergenic or have more of a spaniel coat.

-Dogs for Adoption in MidlandsSuitable to Live With Other Dogs