Darwin is a 12 year old male English Springer Spaniel. He has been a rewarding foster to have and very much hopes he can be for someone else now. He is loved by many and in a lot of aspects a chilled happy dog. When Darwin arrived with me we discovered he had a tumor attached to his ribs which he was given the prognosis of weeks to months to live.

However, he has done remarkably well and the vet now feels he could go on a couple more years! Unfortunately, due to my resident dog and Darwin’s set up it is unsustainable for me to continue with the foster for this long, and I would like Darwin to go to a home where he can have free reign and a very happy retirement. This is also why Darwin would be best as an only dog, so he’s not competing for a human. 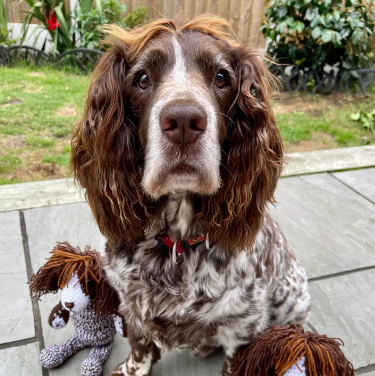 He will be fine to have walks with other dogs he’s been introduced to. Darwin very much has his own character and the strongest nose you will have ever met! He can be bossy and let you know vocally when he wants something such as a walk or another sausage from the dog treat cupboard. His Eyes – as a senior not so good in dusk or the dark. It’s best to announce your presence to him rather than surprise him in the dark as it will make him bark if he can’t see who you are or your movements around him.

I find he’s okay with me, I’m him every day, as I suspect he goes off his nose but with house guests, it’s more important. His ears – were not so great either. This means he has 0 recall as he can’t hear you when he’s trotting along so the lead is best unless in a secured area. He won’t always answer his name when you call him in the house but please do keep trying as we do! It may also be a case that he hasn’t spoken to much in his previous home and so has ‘forgotten’ some things so we have been talking to him much more and do have the typical spaniel head turns now. 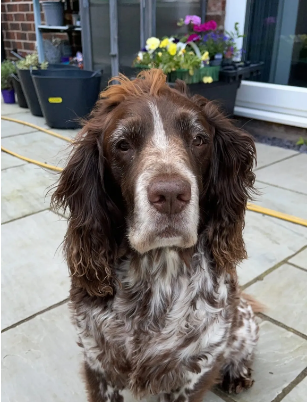 The upside is he doesn’t always hear external noises so barks less! His Nose – possibly due to the above two being weaker he has a VERY strong nose! I believe he uses his nose to make up for the above so you may find a delayed response from him if he doesn’t hear something/someone but smells them instead. This also means he will smell any food you’re cooking in the house and he will like to be able to investigate exactly what food is on offer and be able to check it’s all gone afterward too so he’s not missed out!

When walking him he loves to go past things like terraced houses so he can sniff along the bottom of every door to check things out which is quite amusing. He will also try pushing things open with his nose which he can be quite good at if it’s not locked! He’s just a very nosey dog. His legs – his back legs do look stiff and he has been on painkillers where this disappears. That said either way this dog loves his walks and will happily do around an hour at a time. This can be half an hour or occasionally a little more if there’s a pub he can have a rest at for a bit halfway.

I can not emphasize enough how much he loves a walk in ANY weather and I found a new love for where I live again during our adventures. His Mind – not sure if Darwin has some slight dementia setting in. Possibly he forgets what words mean rather than it being his ears being bad, it’s hard to tell. He occasionally can look a little ‘lost’ and stare at nothing. Or he can occasionally pace or become quite restless and move from garden to room to room and back again as though he is looking for ‘something’ which could just be more sausages but it’s best to be aware that he does this. 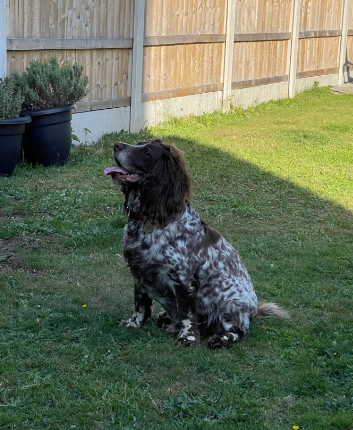 He does settle down again but it can seem strange at the time when he is doing it, I’ve found it works to be his anchor and offer him reassurance and love when he comes back to you and he will settle and sleep. If he does ever seem stressed distracting him with toys or food tends to be short-lived or doesn’t work great. Sitting in the garden or at the back door with him will work and above all giving him affection and love works, I try and wrap my arms around him and this brings him back down.

This may be more apparent during his settling-in period. His Anxiety – Darwin had bad anxiety when he came to me. He had been through a traumatic experience and this took time to ‘fix’. I can’t see it being as bad as this again when he moves to a new home as the circumstances are different but I would expect him to have some separation anxiety until he knows you will come back for him again. I have worked on taking him to new houses and meeting new people so he is much more socialized now he has had sleepovers after having a ‘boys bbq night’ and this has helped him with his anxiety separation.

I went from not being able to leave the room to be able to leave him for a few hours so I could go to the shops etc and he falls asleep on the sofa no bother now. He just likes to be able to check out the front window what’s going on. He will also make a great burglar alarm! Darwin has shown some aggression on a couple of occasions and this should be thought about. 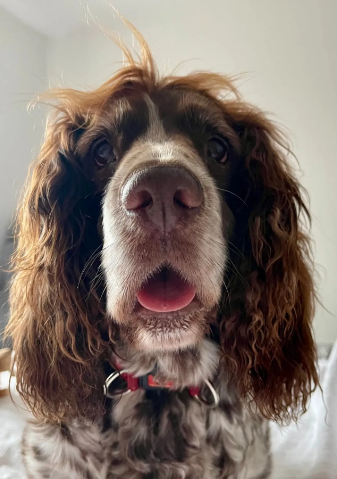 He resourced guarded a couple of extra special treats he found in the garden my dog had left which was unexpected to me as I hadn’t experienced this with him when given his own special treats. I gave him space and didn’t approach him too closely and he left the items of his own accord but I would not have attempted to physically take them off him. In 6 months this has happened twice.

I don’t give him any large long-lasting treats now due to this such as ostrich bones or extra-long pork rolls. He also took a dislike to my dog walker one day and lunged towards her, again this was unusual and possibly because she approached him and swung her arm out to point him behind a baby gate in a dark coat in a darkish hallway but it happened. I now ask house guests to ignore him until he comes to them (which works great) and no swinging of any arms around him or similar gestures i.e. reaching for a hug whilst standing up.

If guests sleep over we also remind him they’re here in the morning in case he’s forgotten so he’s not surprised. He will remember who regular guests are though and want a fuss from them. Darwin has built up great strength whilst being here. Although he is a senior he is a strong senior. When on the lead he will pull every time towards other dogs and this doesn’t matter if they are across the road and he is strong when he does it. He may also jump/lunge toward other people/children especially if they are too close when walking past. 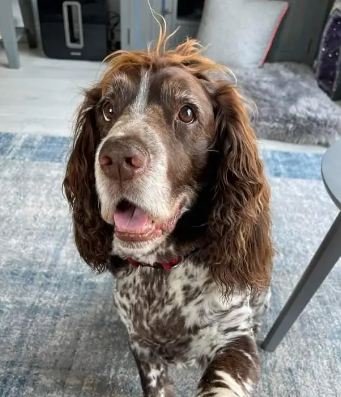 Please don’t be taken by surprise if he does this because more than likely he will do, a short lead is best in public places. In a more rural setting, a long lead is safe to use and he won’t tend to pull as he’s happy trotting along. In a secure field, he does love a short run around and loves to roll on his back in the grass. He will only need half an hour in a secure field as he will tire more quickly.

He also pants quite a lot now – this will happens whether he has a ten-minute walk or an hour’s walk and it will take time for him to settle once back home. The vet hasn’t shown concern about this. Darwin has a naturally long coat. He is happy for me to clip him me no issues and happy to be bathed and hair dried with no issues. His paws underneath will need the fur to be kept trim else he starts to slip on certain floors.

His back dew claws will also need trimming and keeping an eye on as previously they have been allowed to grow back into his legs and cause infection. He does have a lot of lumps and bumps but these don’t seem to be bothering him. Darwin ideally will need free reign of a house to settle better so he can check where you are and follow you around if he wants to. 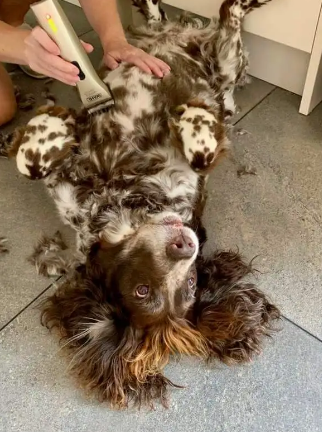 He will sleep downstairs, however, if he can sleep on your bedroom floor you will have a long lay-in! When he’s left on his own downstairs he will bark when he wants you to come and see him and this can be quite early in summer. If he’s around you though then he’ll wait for you to get up to have his breakfast. He really loves the garden and will roll around on the grass and sniff around and sit next to you.

Occasionally he will play with toys but not for great lengths of time. A quick squeaky ball play is enough for him. Really, he is just happy knowing someone is there and he can check where you are free. He MUST have a daily walk. He loves his walks more than anything. Darwin is a great character. He will come to you for affection but not smother you and will happily sit next to you rather than needing to be all over you.

He does like affection, a stroke, a belly rub, a cuddle, and when he has enough he’ll just snooze next to you. I really love him to pieces and it has been really rewarding to see him come along as well as he has done and also see him fighting his cancer. He’s very much liked by many people, especially men! Although I think the feeling is mutual on that one. He loves the outdoors, sticking his head out a car window and BBQs! Visits to the beach are good for him and he will paddle in shallow streams/brooks. He really is a very loveable dog and will make you smile a lot. I call him my bear.