Dickens is a 4 year old male Bichon Frise cross Poodle. He has come into our care from a trusted rescue friend of ours due to them being unsuccessful in finding a suitable placement for him. Given that we have a high success rate identifying triggers and finding homes that can successfully manage them we were happy to help find this boy a fantastic home to love him.

Dickens is such a good dog in so many ways and is 90% perfect aside from 3 definite triggers that can and will cause him to bite suddenly without warning. 1. He will not tolerate having a harness on at all. He does not appear problematic about having it being put over his head but does try to bite when it is clipped up behind his armpits.

Dickins has no issues having a lead clipped onto a collar or a slip lead on. He walks fine on a lead and does not require a harness so this is not overly an issue. We think someone has caught his skin when clipping a harness giving him a negative association with them. 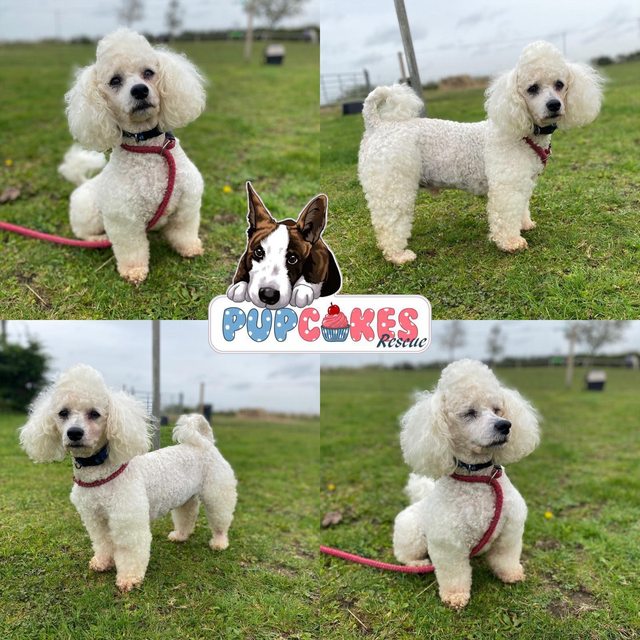 2. He does not like to be towel dried. Oddly enough Dickens is absolutely fine to bathe, you can wash his legs, body and tail without issues. His previous home reported no issues with a professional groomer who he visited often. Previous owners used a blow drier which is advisable on his Coat anyway and he was fine but attempting to towel dry him will cause him to bite.

3. He does not like his tail being touched or brushed outside of the bath. We would advise keeping it short to limit brushing and interactions with his tail. All of Dickins biting triggers appear to centre around being enveloped and over handled. Vets cannot find a pain source relating to the aggression and have put it down to a trauma response instead. We sadly have no background on the aggression or when it started so are unable to accurately identify the cause. These 3 triggers are incredibly manageable but potential adopters must also consider situations similar that could also elicit a similar response and be mindful of them arising.

Dickens is a wonderful dog who is very easy to live with. He is housebroken and non destructive and does not require a crate. He is very affectionate with his people and visitors to the home. He greets everyone he meets out on walks like long lost friends and is wonderfully tolerant of other dogs. We have a randy chihuahua here who humps him continuously and he completely ignores him. He loves sharing beds with other dogs, especially Chihuahua and I think he would like to live with another as he often cuddles up with the ones here.

Dickens is great out on walks and has a brilliant recall. He travels well in the car. He can be a bit vocal out and barks at larger dogs he sees in the distance if he is on lead but ignores them when off lead. He enjoys his walks and walks 3 to 5 miles a day, he was walked by 7 different volunteers and was very well behaved with all of them. He has seen livestock and pulls when he sees a sheep, potential adopters need to be aware he will chase them.

Dickens is a confident, social and well rounded chap who you wouldn’t think had any kind of handling issues when you first meet him. As previously mentioned Dickens has some handling issues but these do not appear to transfer on to grooming other than towel drying him after a bath. We recommend the use of a confident professional groomer who is willing and able to muzzle him should he need it, however he has not needed to be previously. They should be warned of his intolerance to towel drying.

When Dickens gets over stimulated during play he does become quite mouthy, he wraps his teeth around your hands and wrists with a light pressure but this is easily corrected before it escalates. Diverting his attention to toys and only offering toys to play with should be encouraged.

Pupcakes will groom Dickens before any prospective meets so that he is ready and handsome for a hopeful new family.