Jester is a four year old male Greyhound. He has been living in a foster home for almost 6 weeks and has been an absolute joy. He is living with two boys aged 10 and 14 and two adults. He is such a quiet, well mannered and polite dog. He waits patiently for his food, will wait until it’s safe to jump out of the car boot etc. He travels well in the car, he stands up for short journeys but on longer journeys he lies down, he absolutely loved a trip to the beach. Jester is not food aggressive at all, he is so gentle when you hand feed him and doesn’t mind if he drops something and the retriever eats it. He doesn’t pull on his lead at all and likes to lean against you sometimes while you are walking. 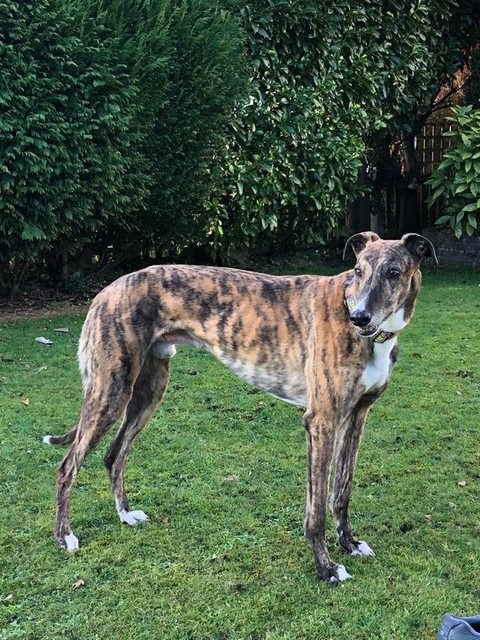 When he sees a squirrel he stares at it but does not lunge at it unlike my golden retriever who chases after them. At the moment we have kept him on a lead for walks and unless we go to a very busy park, he is not muzzled. He likes other dogs, wags his tail and sniffs them and is very relaxed in calmer dogs’ company. He is unsure though when smaller dogs approach him yapping or big boisterous dogs as he is still getting used to other dogs. He has only had 1 accident in the house and seems to copy the resident dog in the garden. He does want the security of a person/child with him when he is the garden and will happily sniff round, rub himself against the conifers (his favourite pastime) and play with a toy. 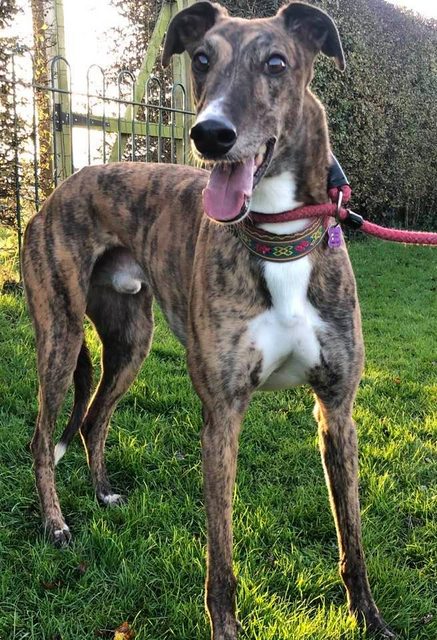 However the minute you go in the house he will follow. I imagine that with time he will be much more confident on his own in the garden. He loves to be stroked and especially loves being talked to. When I talk to him he wags his tail which is just the most magical thing as it took him about 10 days to wag his tail while he settled into our home. He loves lying on his beds and seems to spend a lot of time sleeping. At night he sleeps on his own in the kitchen from about 10.00pm – 6.30am and is very settled. He is sometimes left for circa 2 hours when I am at work. He is with my other dog but has not shown any signs of separation anxiety from adults. On the 2 days that I work a have a really good dog walker who walks him without my other dog and he is absolutely fine. First thing in the morning he has a good run round the garden but then doesn’t bother again for the rest of the day. 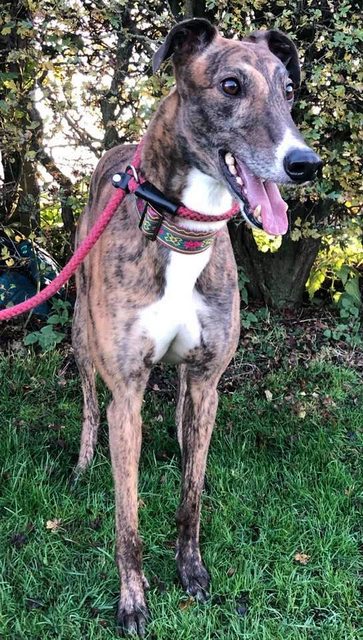 Jester is initially timid when he meets new people. He will go to the door when visitors arrive but then backs off when they enter the house. However if people kneel down and talk gently to him then he does usually approach them. He has a good memory though as if the same people come back to the house then he usually remembers them and is more relaxed in their company. With grandparents etc he is now very relaxed with. He is a bit noise sensitive, if there is a bang inside or outside he usually stops for a second but then does quickly regain his composure. He will happily lie on his bed while I vacuum round him. We have had various dogs in our house over Christmas and he has enjoyed meeting them and seems to be relaxed with them. Jester definitely needs another dog or dogs to live with,he is a shy boy and does need to follow another dog.

Jester is still settling into life in a home. He is a wonderful and calm dog but there are times when he is timid and needs someone gentle to re-assure him and let his confidence continue to grow. He has got a few retriever traits now and when I come into the house he often brings me a toy or slipper. He loves cheese, chicken and toast. My ideal home for him would be someone who serves him toast on his bed mid morning which he eats lying down and then goes back to his sleep. Jester is our first experience of a Greyhound and it will be incredibly said to let him go to his forever home as so far he has been such an easy, placid and beautiful natured dog.

Jester is vaccinated, microchipped, neutered and flead and wormed. He can be homed both locally and nationally dependent on a successful homecheck.