Lenny is a 6 year old male French Bulldog. He is neutered, vaccinated and microchipped. He will be flea and worm treated and leave with a lead, collar and harness. Lenny has had a very turbulent life and we don’t fully know how many homes he’s had. We know he has passed through two separate rescues in the last two years before coming to us.

The first rescue passed him on for reasons that are unclear to us and the second placed him in a home with another dog with the knowledge that he was dog friendly but were not able to accomodate him back when the placement broke down due to the resource aggression with the resident dog. Lennys family reached out to us for a safe exit for him. 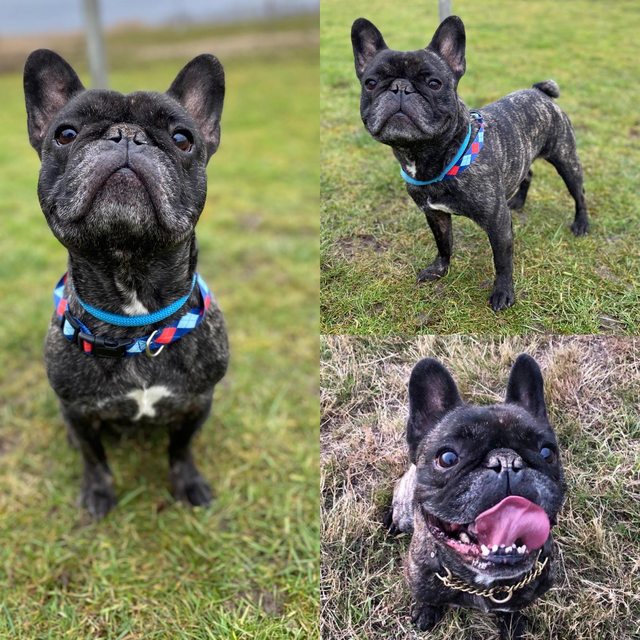 Lenny loves to sit next to you or on your lap and watch tv with you. He especially enjoys movies or programs with animals. He loves lots of fuss and cuddles but also does enjoy his own personal time too. He’s a very self sufficient boy and will happily take himself off to his bed when he’s had enough and enjoy being there.

Lenny is quite playful and very cheeky. He enjoys winding his people up by picking up dropped items and running off with them. If you don’t chase after him he will either try to rip it up eat it in front of you! Showing him a high value treat normally grabs his attention long enough to pick up any seized item he has. Saying “cheeky boy” to him gets him all fired up running around doing zoomies!

Lenny loves walking and stays very close to you. He checks in regularly and listens well. He will not tolerate having a harness on though so needs to be walked in a slip lead, he is happy with this and it causes no issues.

Lenny is very clean in the house. When he’s let out in the morning if you say “wee wee” he will go straight away. He seems keener on concrete though and a bit worried about grass.

Lenny is not outwardly dog aggressive and can mingle with other dogs on walks with little to no reaction. The problem is that he switches very quickly over something that he deems his. Because of this he cannot go to a home with another dog but could be walked offlead in large packs of dogs however we would recommend the use of a muzzle to keep everyone safe.

-Dogs for Adoption in MidlandsNot Suitable to Live With Other Dogs