Milo is a 2 year old male Cockapoo. He seems to be followed owing the typical trend of this beautiful cross breeding; he has been surrendered into rescue due to resource guarding behaviour and biting. He is a complex little lad who doesn’t fully understand why he’s doing what he does, but the behaviour has arisen and now he needs a home with the experience to continue to work with it.

Milo has not shown any aggression whilst in Rescue but from his previous homes write up it would appear he gave very little signals prior to biting. This is typical of some cockapoos. We often think that a dog will give huge signals before biting but this isn’t always the case; some dogs growl, some show teeth, some lower their heads, some stiffen their posture and give it a decent period of time for you to get the message whilst others jump straight to the bite from the initial warn (which can be subtle.) Milo follows the later.

Milo has had 4 homes in his little life and had bitten in 3 of them which ultimately lead to his surrender. He was purchased from a breeder by his first home who had him until he was 18 months old. 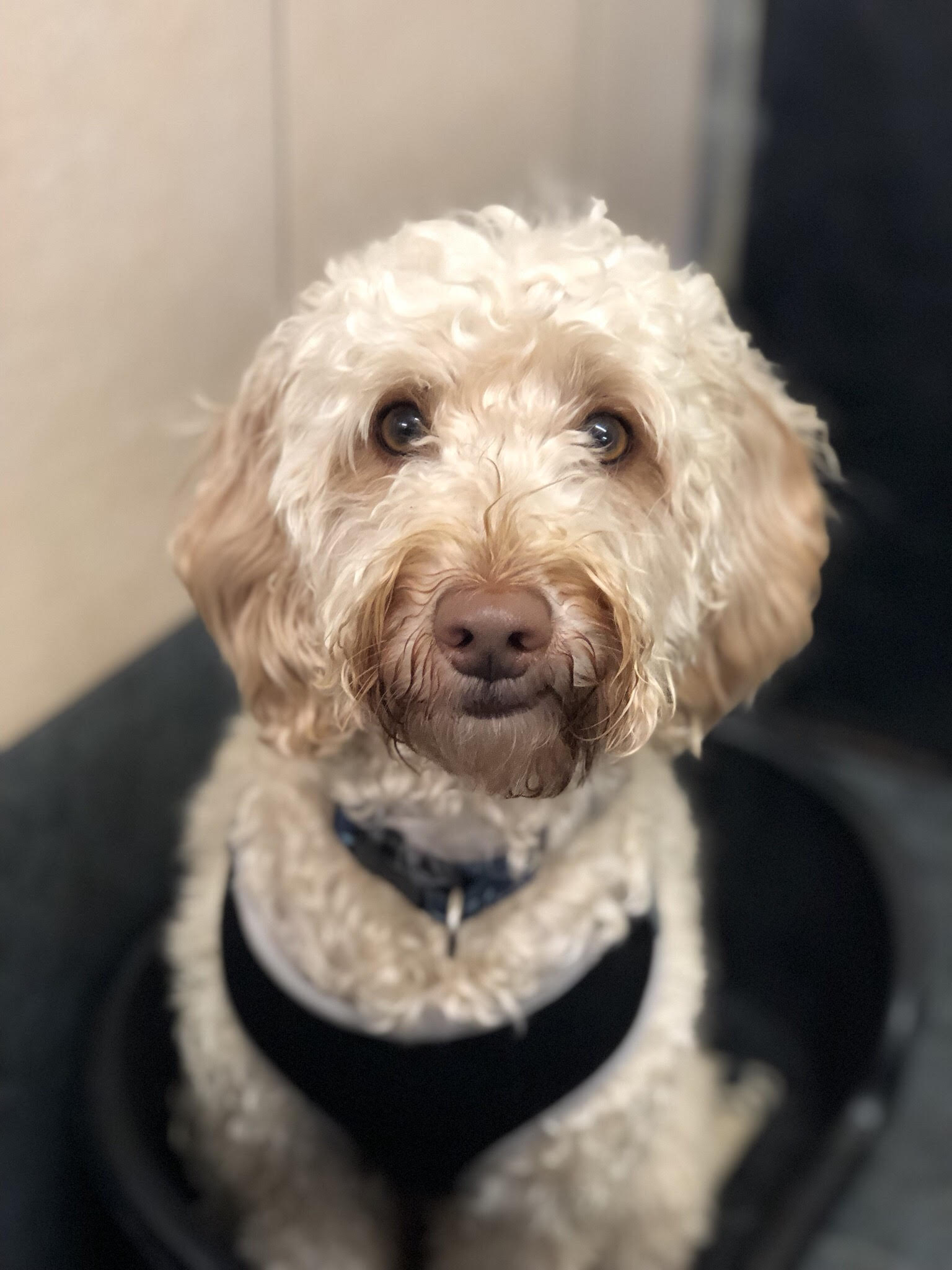 The family had a lot of change and the youngest son moved in and out of the home taking Milo with him. This resulted in him being stressed an anxious from the continued movement; he was crated for long periods of time and not walked. The stress caused him to growl at the woman of the home and they decided to rehome him as she was not coping well with his change in behavior. Milo was then taken in by a lady who did a lot of good work with him.

Unfortunately he bit her 12 year old son when he attempted to take a kinder egg that Milo had left on his bed. The family persevered but Milo bit again a month later jumping up and catching the fathers hand when he got up from the sofa. They no longer felt it was safe to keep him and rehomed him to a lady in their village.

Unfortunately things went from bad to worse when Milo was mishandled, pushed out of his comfort zone too early and bit the ladies friend as he attempted to put him into a jumper. Afterwards he went to live with a lovely couple who really tried with him but he bit again unprovoked quite suddenly when having his head stroked. We think this was fuelled by his own insecurities around men and although the man did nothing to provoke it, Milo is noticeably uncomfortable in certain situations with men. 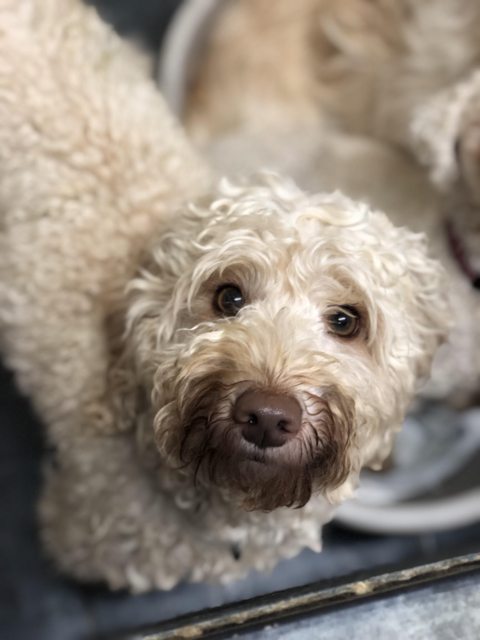 Milo is not a bad resource guarder despite what has happened; he actually will give you something if you ask him to and happily swaps out things for a higher value treat. Milos problem is his lack of visible warning prior to a bite that his new owners will need to be aware of. His needs a very dog savvy home who can read body language.

He needs strict firm boundaries. He must not be allowed on the beds or sofas or something level to you and if ever you need to remove something from him it must be swapped out with something higher value, trying to take it off of him may cause him to bite. Milo is actually a very good dog in so many ways. He is housebroken and wees and poos on command, is non destructive in the home, crate trained, travels well in the car, is happy to be groomed, knows tricks and is trained well. He walks well on the lead and loves everyone he meets.

He’s social with dogs outside on walks and enjoys playing with them unless they are large darker dogs like collies and labs.. he is not keen on them. He doesn’t only resource guard typical things like toys and his bed (against both dogs and people) he is also a discreet guarder with unknown things (scraps of paper, pillows, shopping bags, oranges and eggs seem to be his main things) basically things you can’t predict which is where an incredibly experienced keen eye is needed to spot the signs for this. 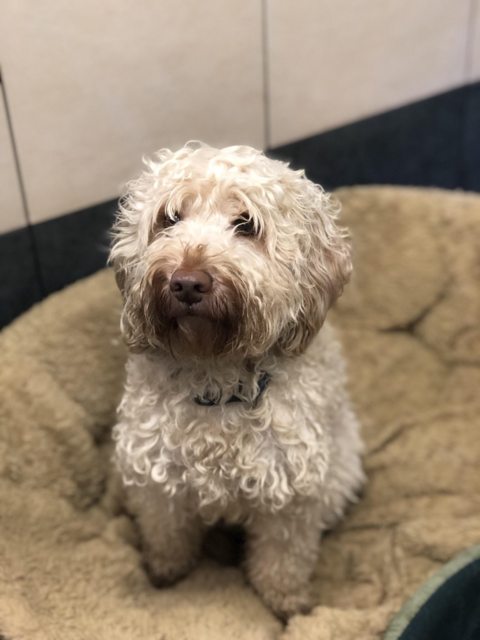 For those who don’t know Resource guarding refers to a dog displaying behaviour (growling, snapping, etc.) intended to convince other dogs or humans to stay away from a particular treasure or “resource.” The resource can be food, treats, toys, a place (a bed or favourite chair), or occasionally a person. Since being under the care of Pupcakes, Milo has been extremely friendly and social with dogs and people alike but he may change on entering a home environment that he comes to recognise as his home.

Milo gets on well with all of the dogs in residence here and does not appear to guard space against them however will guard toys. He would be able to share his home with another playful female companion of similar energy level but alternatively could live happily as a solo dog. He isn’t as comfortable with male dogs however we haven’t seen any problems with them.

Milo is not allowed soft toys – he will guard them, tennis balls and toys on ropes are safer options. Incredibly mouthy – he grabs at hands playfully and doesn’t realise how hard he does it. This might be contributing to his biting as he isn’t aware he could hurt you. He is not a typical biter. Milo does not flash bite quickly; he holds on and needs distracting to release. Incredibly “poodle-like” I’d say he was a Cockapoo cross Toy Poodle as his coat exhibits more from the poodle breed and his is incredibly small.

Milo needs a home that is experienced with resource guarding and happy to continue with the training the rescue has put in place here. Due to his lack of signals, of being touched suddenly and the fact he has a bite history we cannot accept applications from homes with visiting or resident children under 13. He is a sweet boy who loves people and having a belly rub, he’s silly and playful and will really flourish in the right home.

Milo will benefit from a home that is active; he loves to walk and when he’s regularly exercised his resource guarding behaviour improves dramatically. A tired dog is a happy dog we always say. He also would be a fantastic candidate for something like Cani cross or agility.

Milo is neutered, vaccinated and microchipped and will be subject to a home check and adoption donation. Pupcakes offer all adopters 4 weeks free insurance and a complimentary voucher for a box of free dog food.