Mouse is a 3 year old male Pointer cross Spaniel. He is being fostered in family home with other dogs and cats in Gloucestershire. We know he was owned by a hunter in Spain, he was beaten and ill-treated and one day refused to come back as he was too scared, he tried to survive on the streets of Spain with another little dog called Rosie, but he is not that sort of dog he is too gentle. People tried to catch him but he was too scared, slowly over the weeks he got weaker and weaker and was eventually caught in a dog trap. 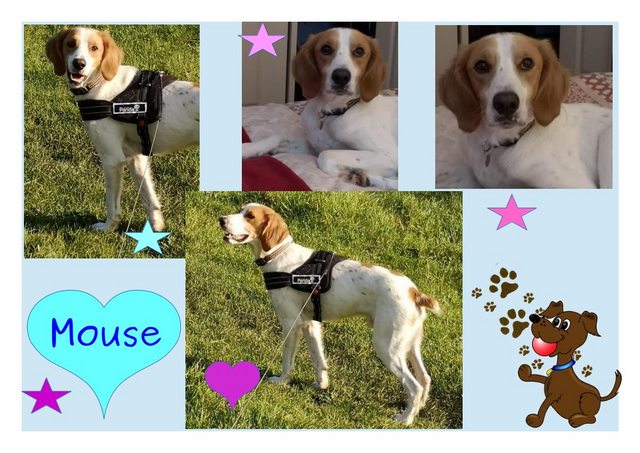 The terrified dog was carried home by a lovely man who fostered him – there he started to learn not everyone is bad not everyone beats you and he slowly started to respond. We agreed to help him and Rosie because of their gentle natures. He arrived with us nearly two weeks ago and I must admit he arrived terrified – we set up a crate for him in the kitchen where the other dogs sleep so he had a safe place and could relax even in this scared state you could see what a gentle soul he was and he so wanted to trust you.

The progress this dog has made has been little short of amazing – he still has a long way to go in the way of trust as even now he cannot quite believe you are not going to hit him but he nearly believes it.

Over the last few weeks, we have done quite a lot with Mouse as I wanted to keep him with me a lot so he could learn to trust whatever happened it was never going to be bad. We started going for gentle walks with my young Spaniel and then progressed onto runs around the village he was not sure at first but each time I have taken him he has slowly got more confident and will run beside me now without hanging back. He was quite nervous around the traffic although we do not get a lot but again seems to be not as fazed now.

In a home there is 3 of us – 2 adults and one adult child and he loves us all – thanks to his foster carer in Spain being male he has had no problem bonding with my husband. He gets on well with the other dogs but tends to ignore them but is happy to relax in their company. He seems to be still too scared to play but is slowly getting there now we have seen signs and we are fostering two small bitches and he seems to love them. He gets on well with my Spaniel and they often snooze together but no playing yet.

He travels really well in the car – he is happy to jump in and we do not hear a peep out of him he travels in a crate. The next step with him was off lead, we have an acre field where he was fine but I was wary about letting him just in case he got spooked but was noticing out and about he was not fazed by dogs or people. One of the Starfish family has a secure 25 acre field in Stratford so along with friend we decided to go down there, there was about 15 dogs, 5 new people and he was off lead.

He has also attended the agility club where I go to and watched from the edge, I have done this a few times. So many people have been so kind and given him treats when out and about so everything that happens is positive. He is house trained; he sleeps in his crate at night with no problems. He is quiet in the house and if I am working on the computer, he will just lays down in my office with me.

So, Mouse like Rosie has amazing potential – I am making him sound so easy and he is but he is still very nervous and has a long way to go to be the dog he always should have been but he is well on the way now- he still cannot believe i am not going to hit him, he is shy with new people and situations – he may always be a bit shy. He still has a long way to go to feel relax enough and confident enough to really love life outside the home.

Mouse loves and I mean loves his walks in the countryside – he is now off the lead and he runs and runs – he loves flushing pheasants out but never chases them just flushes them – the only life stock we have met are cows but he ignored them. He will need a confident, experienced owner, or owners who have rescued before, adult only home as he has no experience of living with children and because he is so timid and still not trusting you are going to not hit him it has to be a quiet home.

Mouse is not a town dog and would only suit a country home – someone who understands Pointers/Spaniels and their need for exercise and who will have the confidence to let him off – he has not got the best recall in the world, but I feel this could be worked on – you will not lose him and he always comes back, but not straight away – he is very relaxed around the other dogs although not playing yet he is nearly and in time all this will come together with the right people.

I think he would benefit from whistle training and would respond well; I think dog training would be beneficial for him too – he is a bright dog and so wants to please – but you have to be a gentle calm home – he is motivated by food so easy to train. I also think he would do well with other dogs – but if you have bouncy dogs who may over power him trying to play etc it will not work – my dogs have just ignored him and let him come round in his own time.

He lived with cats in Spain and was mostly fine with them but would bother them a bit in the way sniffing and following them around and other times totally ignore them and sleep with them, I also have two cats and would say he is very similar – I have never seen any aggression but he does stare a lot and want to sniff them and I just tell him no and he stops – other times he completely ignores them and just lays with them – so fine with cats but they would have to be cats that were confident around the dogs otherwise it would not work. He is a joy and I love him very much – I have put a lot into Mouse to show people how wonderful he is now and the progress he has made in such a short time.

If I did not have two elderly dogs Mouse would not be going anywhere.

Mouse is neutered, vaccinated, has his own Pet Passport and is blood tested.

For further details regarding one of our dogs please email us at starfishdogrescue@hotmail.co.uk for our application form - we are only a small rescue and we get to know our dogs properly before they are put up for adoption, we work with two rescues in Spain for the last 7 years and also travel to Spain to meet the dogs and assess them before we agreed to take them as we are a foster based rescue - we also help the local dogs in Gloucestershire and also link to a local Pound in Bristol that we help, we do take our time and make sure its the right match and put as much detail as we can in their write up what sort of home will suit that particular dog. All our dogs are neutered if old enough, fully vaccinated, chipped and blood tested - they go out with a full vet history, all homes will be home checked without exception and you will be expected to travel to meet the dogs we never deliver dogs. We are small rescue solely run by volunteers. You can see more of our work on our facebook site and website under Starfish Dog Rescue.