Murphy is a 2 year old male English Springer Spaniel. He needs an experienced home. He deserves the chance to find consistency, he has had six homes in his short life so far. He has learned to protect himself when he is unsure of a situation or stimuli. He tires easily and this also leaves him overwhelmed and agitated. 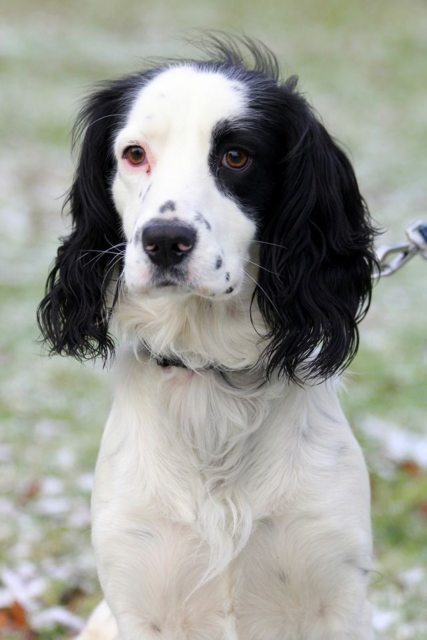 He can guard rooms and objects within a house and subsequently has come to me to learn to adapt to living in a kennel (heated and insulated). Once he has stability and trust, there may be a time, he could return indoors – but for the beginning outside is the best option for him.

Since in my care I have witnessed no aggressive tendencies at all. He is a “typical” happy, waggy tailed Spaniel. His prey drive appears HUGE, and mostly he is searching for movement from a Sheep, Bird, or anything he could possibly chase. Therefore, he has not been off a long line. 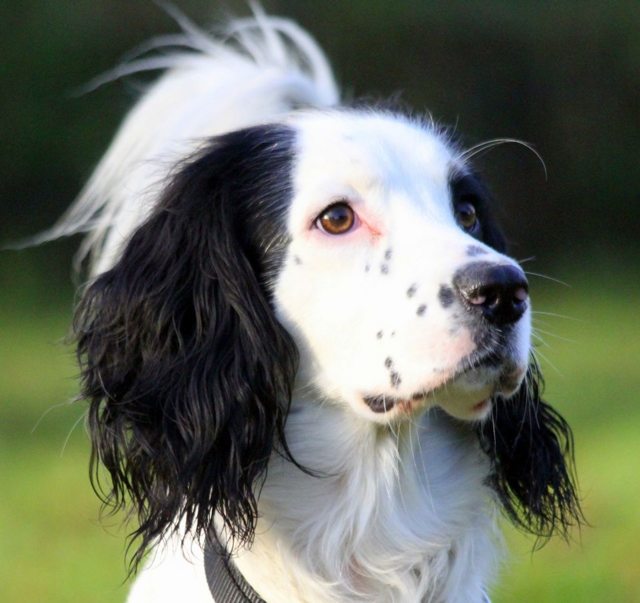 He will require a VERY secure garden, as he shows great potential to escape (I have also seen him initiate digging at the fence line). He is dismal (!) on a lead, he has very little focus on me when out. He is not ball driven, nor treats and appears deaf to his name. I have been doing some basic training within an outbuilding – he is definitely somewhat better inside, but it’s still early days. I have also struggled to socialise him with other dogs, I have read he is good with other dogs, but I have not had that experience. 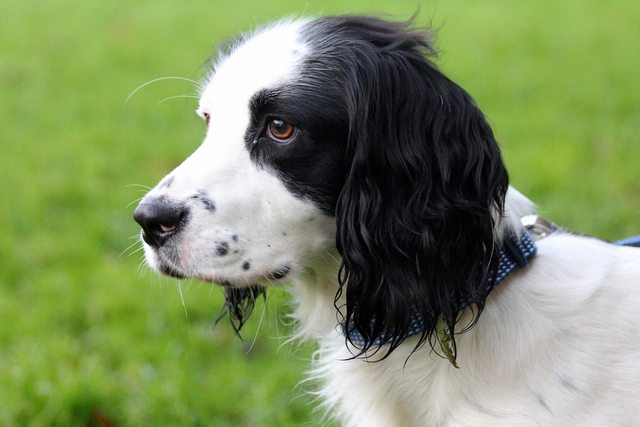 I have tried with a group of dogs and single – all end with him lunging and growling at them. Perhaps this is due to him being leashed and them loose. He does enjoy scent work/play – search for titbits beneath plastic cups within one of our sheds. He is good in the car. No issues with drying him. He is not keen to be brushed, and I read he is difficult when tats are being removed.

Murphy has been known to steal things around the house – and will then either destroy or guard them. Which is when someone has been bitten. His behaviour then causes him to be very anxious for a while. (He has bitten both in previous foster care and also owners). It has been said that he has separation anxiety, and howls when left. Although now being a kennel dog I have not witnessed any such behaviour. And he appears very content and relaxed when left. 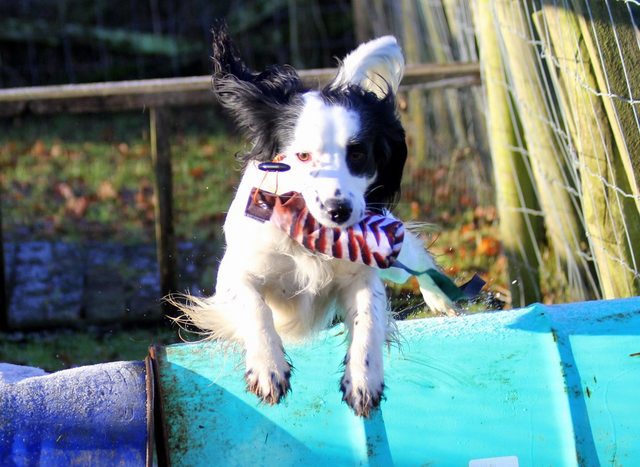 Previous Foster Parents wrote: Murphy has a few issues including separation anxiety, shadow chasing, and guarding. He does bark at noises, although we do live on a bridleway. His separation anxiety is relatively mild, he has been crated whilst we are home, he does not always whine/bark.

If he does it has not lasted more than a minute or two. When we leave the house, he does howl and bark but is silent after a while and is quiet when we return. On both occasions he greets on return, if he is not ready, he will remain in the crate and appear in his own time. 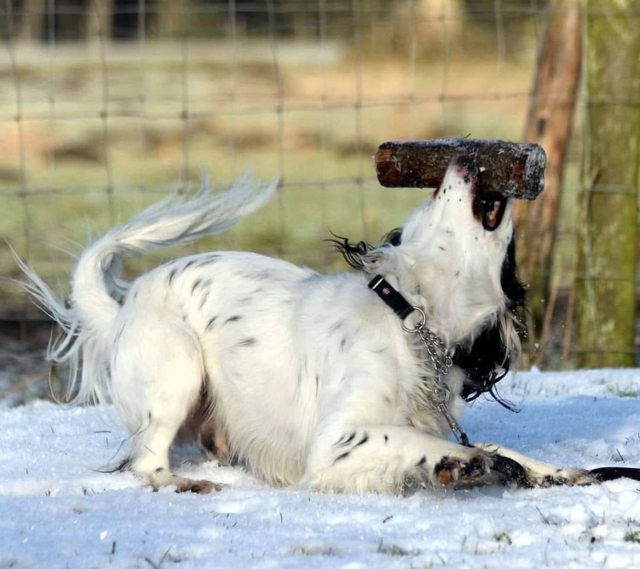 Murphy has displayed shadow chasing whilst in our home, not frequently. He can be easily distracted with basic training allowing him to move his focus onto something else. His main issue is guarding and for this reason, he will need a home that is clear of any items he can pick-up. This can lead to lunging, barking, growling, and has bitten in both his previous home and whilst in foster.

There are no toys, beds, blankets on the floor to reduce the opportunity for him to guard. He has been allowed on the sofa but has not guarded these and will get off when asked although not fully understood yet. He is allowed access to his crate when he requests but it is otherwise shut. 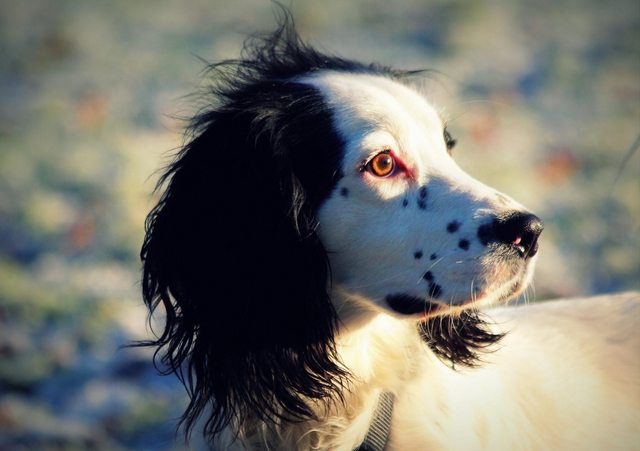 Murphy’s favourite things to guard are those that he should not have, a favourite is shoes. Although he does also guard items which are his therefore, he can be a bit unpredictable. If this is caught quickly (roughly in a minute) then he can be distracted with training however, the longer this is left the severity increases. He has started to enjoy enrichment activities; he loves peanut butter (dog friendly). 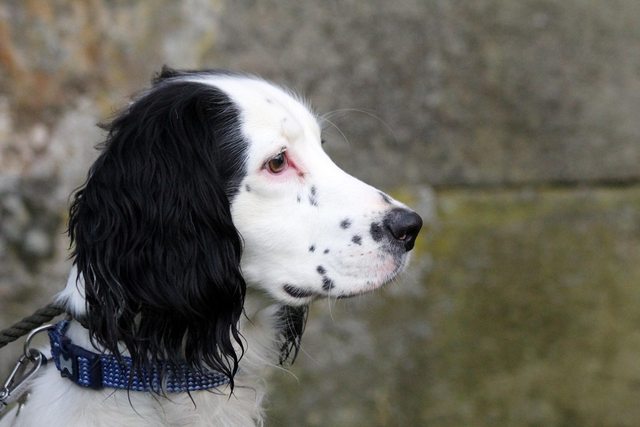 However, these have been given to him in a crate. We have tried offering this outside of the crate but he will guard severely, although we believe this to be down to having another dog present. He would benefit from 1-2-1 training with a Dog Trainer. Agility (inside) would also be a great option for him to interact with new owner. Scent Training classes he would love also. He has been running using a canicross belt with great success.

For further details about adopting a dog from Spaniel Aid, please contact spanielaiduk@gmail.com Please note, dogs under the care of this rescue are rehomed across the UK and all dogs will be vaccinated, microchipped and spayed/neutered. Home check applies, and full post adoption support is offered.