Nora is a 2 year old female Labrador Cross. Seen being thrown out of a van with 5 other dogs, a Lab bitch and two pups, a Cocker bitch and Nora, by a passerby who did nothing. We pieced the story together bit by bit over time. Subsequently picked up in a variety of locations, one in a sheep shed, two turned up at a rural home, one killed on the Road, and Nora was found 24 hours later, sleeping in a farmers round hay feeder, in his barn with the cows. They were never claimed. 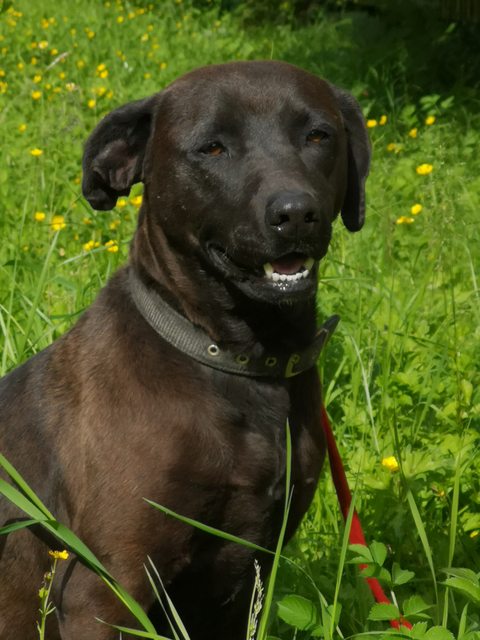 All the dogs were in terrible condition. Nora had infected skin and eyes, a terrible limp, and was severely underweight. She had clearly recently fed puppies and was all saggy underneath- – hence naming her after Nora Batty from ‘Last of the Summer Wine’. Her skin and eyes recovered quickly with treatment, with worming and good food she put on weight and condition, and fortunately the limp was bruising and nothing serious, maybe one of the cows had kicked her. Well look at her now. All ready to go and currently interviewing prospective new families. 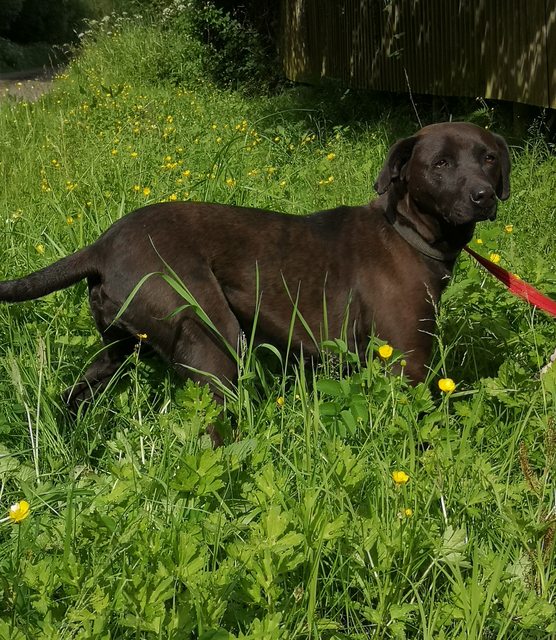 Nora, a Labrador mix, is now in tip top condition, and we have had her spayed. We don’t know her exact age, but initially assumed a similar age to the Labrador also dumped, (she had a microchip which gave an age, Nora didn’t), so put her as 3-4, however as she has recovered, so she seems to have got younger. So we now feel she probably was bred at her first season, and is around 2 now. 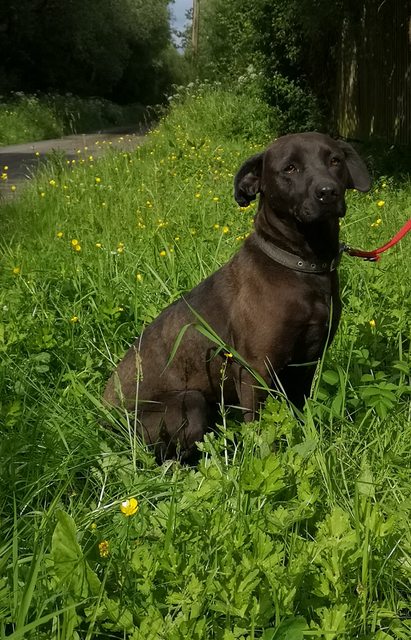 Nora adores children and adults. She can be a little boisterous, so no tinies- over 10’s only. She is not generally destructive, but does like to play surgeon with soft toys, so may do the same with cushions if left alone with them. She is now clean all day, we contain her at night in a small area, where she sleeps with her best buddy, Reef, an older Springer Spaniel. 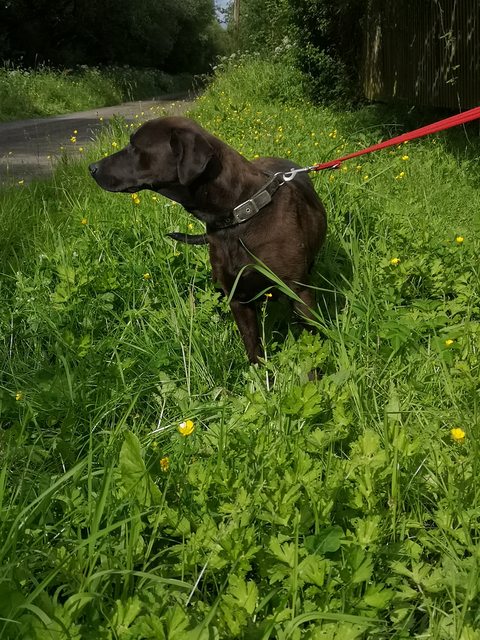 Nora walks well on the lead, after a few yards of excited ‘we’re off’ pulling, this is easy to work with and now only happens with new people. She is pretty good off lead too, but we are still working on her fast response when approaching others as she wants to charge up and say hello. Nora travels well too. She is fine with most other dogs, has clashed over food with one bitch, who has a very strong character. She does get a bit possessive of her humans if they have treats, or if food is about. So possibly best as an only dog, or with steady more mature dogs.

For further details regarding available dogs from Lizzies Barn, Kidwelly, Carmarthenshire, please contact Fionna at rehoming.lizziesbarn@googlemail.com or call 07976 538588 All potential homes will be vetted and a set donation is payable upon adoption. All dogs will have been assessed and vet checked and, unless advised otherwise, will have been neutered, vaccinated, micro-chipped etc prior to adoption. Potential adopters are expected to travel to Lizzies Barn to meet/collect their chosen dog.