Orme is a 11 month old male Cross-Breed. He loves playing with his toys, especially if they are squeaky, has numerous balls he likes to chase around the garden, and loves a good chew on an antler. He goes for walks 3 times a day to the local park. Where he is very sociable with other dogs. He isn’t let off the lead , as the park is unsecured and there is a worry he will not return if called, too many distractions. He walks well on his harness. 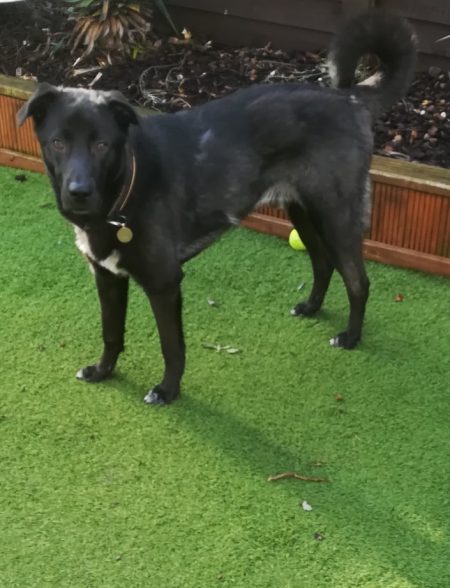 He is very sociable with humans and other dogs. He is very boisterous around small children, due to excitement, but we do not have any concerns around the visiting granddaughter, but they do keep a close eye on him, as he is likely to knock her over when he’s in a daft mood. He has learnt commands, he sits well, waits and gives paw for treats. He is fully house trained. He has two meals a day, of Harrington’s Dry Food. He has no guarding issues of food. He takes treats nicely, does not snatch. He prefers to sleep in a comfy armchair rather than a dog bed. He takes himself off to his chair when he wants to, and is settled on an evening, without whining or crying through the night. 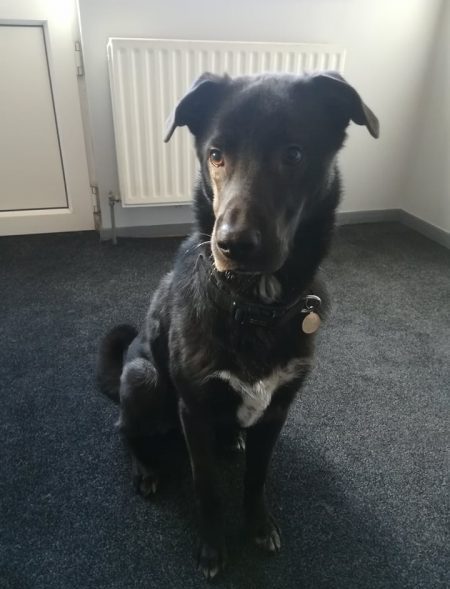 He has his own safe space to retreat to when need be. He loves nothing more than sitting at the front room window, watching the world go by. Now and again he is vocal when someone walks by. He is comfortable going to the vets, not anxious. He is not scared by fireworks or loud bangs, will comfortably sit and watch. He is not afraid of the hoover either. He does get car sick on long journeys, but is perfectly fine on short journeys. He enjoys being groomed, sits calmly as though he is having spa treatment. He is currently shedding so he needs daily grooming. He is good when having a bath, and calm when having his claws clipped. 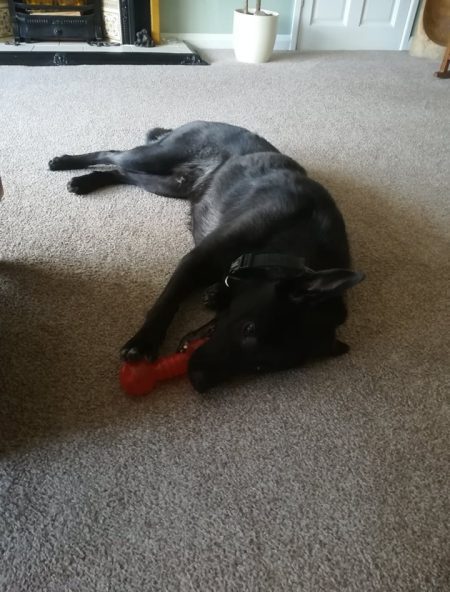 He enjoys being in the garden, he has never attempted to escape. He enjoys doing zoomies and playing catch. He enjoys digging holes in the flower beds. He can tend to damage plants and shrubs. He is very affectionate, but has never been a cuddly sit with you all night long kind of dog (although is more than welcome to snuggle up, he has never bothered).He does not like to be left alone for long periods, as he becomes destructive due to boredom. He is looking for a new home due to his owners work schedules changing and he is being left too long.

For further details about adopting a dog from Bid to Save a Stray
please email roz_mears@yahoo.co.uk or telephone 01484 604289.

Bid to Save a Stray / Friends of Targoviste Rescued Dogs works primarily with a private Romanian shelter to re-home dogs throughout UK and Europe who have been rescued from the brutal Public Shelters of Romania. We nurse, care for and nurture damaged and injured dogs until they are well enough to be re-homed. We educate potential adopters on good animal care and offer a full back up service to all our adopters.

Please note this rescue will microchip, vaccinate and spay/neuter all dogs before rehoming. A home check and donation fee applies.