Pico is an 11 month old male Portuguese Podenco. He is the most adorable little chap and people fall in love with him the minute they meet him. He is exceptionally submissive, friendly, kind and koala bears against you begging for attention. He’s still very silly and puppyish in his mannerisms I am not ashamed to say we all have a real soft spot for him here.

Pico is another dog let down by foreign importation. He was bought over from Spain with no rescue back up to owners who had utterly no clue what owning a foreign dog would entail. They were well meaning people but when they were not able to cope with his behavior they believed they were doing the right thing by signing him over to a large scale rescue organization to find him a new home. Sadly this well known organization has a very high kill percentage of dogs who bite or show fear based aggression and lets just say this guy was very very lucky to be released into another rescues care. 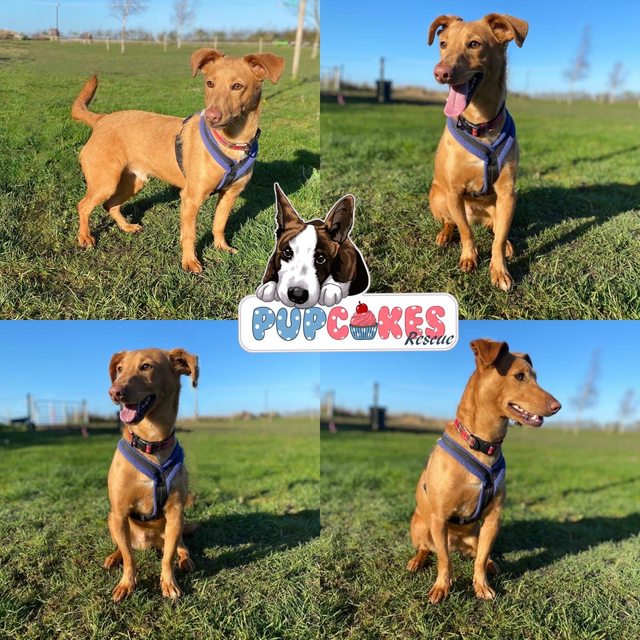 So, Pico does have some behavioral problems which to his first very inexperienced owners may have seemed like the end of the world but to a knowledgeable dog savvy person these behaviors are incredibly easy to decipher and very manageable to live with. He can be selective about how and where he is touched at times but this is mainly limited to his flank area. Vets cannot find a pain source and have put it down to a trauma response to something that has happened in his past. It is not all the time and generally he loves being stroked however reaching down suddenly to touch him on his flank area or catching him off guard to grab his harness can cause him to swing round and mouth heavily.

I suppose some would describe it as a bite, but there is a huge difference between a dog who swings round to warn you that he in uncomfortable with a situation and a dog who bites with intent. I have experienced it myself when I went to pick him up suddenly (my bad) and he swung round and wrapped his teeth around my hand with a very light pressure, it did not break the skin nor bruise or hurt. He has since mouthed another time to tell me he was not happy with something, like when I tried to lead him by his harness and he did not want to go in that direction. 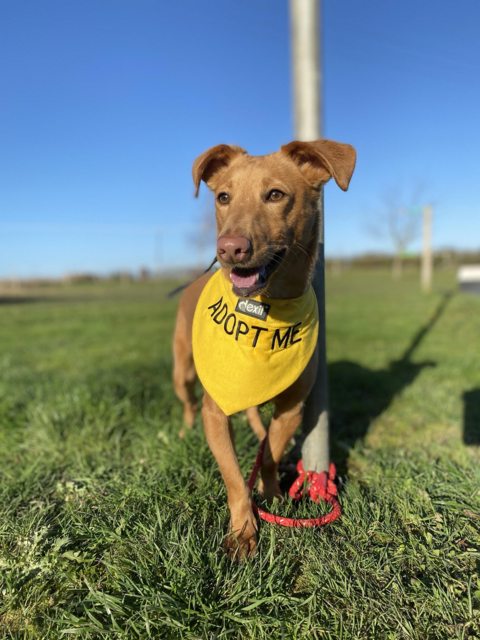 But his mouthing was much slower and you could tell he really didn’t want to do it, he was just letting me know that he didn’t want to and that’s how he’s learned to communicate that. I quickly popped a lead on his harness instead and lead him forward with lots of encouragement and he was as right as rain after. A lot of these situations can be avoided by problem solving before Pico feels like he has to mouth to tell you he’s feeling uncomfortable but care and consideration will need to be given to the fact that it could escalate onto a full scale bite if he is pushed over his threshold. Using a lead to move him from places is advised rather than a harness and collar and being mindful of your hand movements around his flank area.

It appears he has been tied up at one point as tying him to anything makes him quite distressed and he tries frantically to free himself. There aren’t really many situations where I can see adopters having to tie dogs up though so I don’t overly see this as a problem, we just like to tell you everything. He does go in a cage very happily and settles nicely in one so crates for car safety and even in the house would be good for Pico.

Picos original adoption placement lasted about 3 months and he adjusted to living in a home quite well. He is very agile and can jump quite high for such a little guy so that is something to consider if gates are going to be used to keep him in a kitchen or something overnight.

Pico knows some basic commands and enjoys carrying tennis balls around. He’s quite cheeky and will mouth and grab at things you are holding in an attempt to get you to play. He can get very overexcited quickly and jump and grab at clothing too so need to be distracted and redirected with toys or treats. He sometimes does this with his harness too and we distracted him by dropping treats on the floor whilst we put it on.

Pico is good with dogs. He plays nicely in the play yard with them and shares his suite with a friendly neutered male. He could live with other dogs or as a solo dog quite happily. He has no real understanding around food etiquette though and is SUCH a foodie that sometimes he will try and edge in on other dogs during feeding time and can’t understand why they tell him off. There is no aggression on Picos part though but to keep him safe we would recommend feeding separately.

Pico really enjoys going for walks but will need some further work with recall and just general lead walking to heel. He would benefit highly from attending a life skills course or a puppy class. He does need some more work on his housetraining too but he’s really sharp and is getting it! As we’ve said he does really like his crate and It may help with his housebreaking and keeping him out of mischief. He has not destroyed anything here but he is an inquisitive puppy so would need a crate or secure gated area when he was left unattended. He does not have any separation problems and is happy to be left for reasonable durations of time.

Tweet
Previous
Next
Tags:-Dogs for Adoption in Midlands Experienced Owner Preferred Good With Older Children Suitable to Live With Other Dogs