Poppy and Dot are 2-4 year old female Pomeranian cross Chihuahuas. They are being fostered in a family adult home with dogs and a cat.

Nobody was looking for them and nobody claimed them from the pound which is very sad as they are such sweethearts. Cruel world. 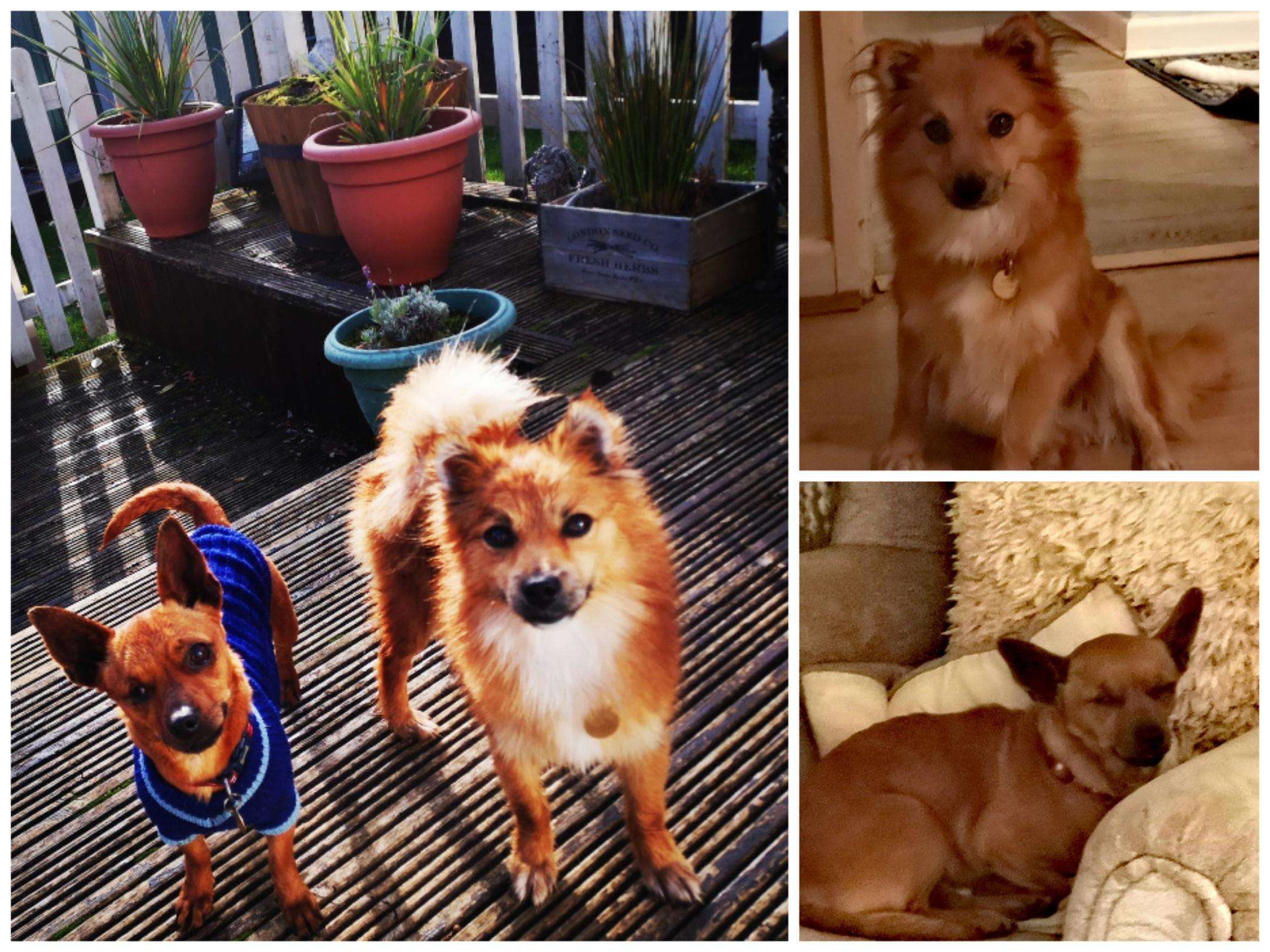 Since coming into our care, they have proved to be gentle, little sensitive sweet hearts, they really do not have a bad bone in their body, they were quite nervous about our dogs, to begin with especially as one of them is very big but have settled down fine and have ignored the cat.

They have lived in a home before and I think well looked after as Poppy’s coat was not really in a terrible state only her tail because of being on the run for the week so had seeds etc caught in it.

I have not taken them out for proper walks on the lead yet as they were spayed etc quite soon after they came in, but they know how to walk on a lead and travelled in the car fine.

Will update you on this once they have recovered further from their surgery. They appear to be mostly house trained although have had a few accidents but probably more due to it being early days and worried. They were good as gold at the vets.

Poppy Pom, straightforward Spay, dental but only to remove a bit of tartar had good teeth, has started vaccinations and also been chipped as wasn’t, not been used for breeding does not appear to have ever had puppies.

Dot – straightforward spay, needed dental as had loose teeth removed and tartar removed, started her vaccinated and was also chipped. Again, has never been bred from.

Dot has seen an eye specialist about her eyes, one eye she is completely blind in she was believed to be born like this, the other eye has an old injury but does not affect her sight and she gets around fine you would never know she only has vision out of one eye we have this report. S

he has had a small operation on the eye that she is blind in as the top lid is rubbing so to make it more comfortable the vet has shorted the lid.

So, all their vet treatment is over and the girls are now recovering and will then be able to start living a normal life, getting used to feeling secure and safe, lovely countryside walks.

These two girls are very bonded and at this stage, I do not think it would be kind or fair to split them.

They need a quiet gentle home as I think the busyness of a family home would be too much for them as they are very gentle sensitive little souls – I know this will change as they feel more secure but I think if they could talk that would be their preference.

People who have been rescued before so can be sensitive to their needs and not rush them.

For further details regarding one of our dogs please email us at starfishdogrescue@hotmail.co.uk for our application form

The dogs that find their way to us are those in need of support in a small home-based rescue where the dogs are fostered as our own in our homes, the old, the young and more vulnerable that would not do well with a kennel-based rescue.

We work closely with the dogs assessing them so we know them so well we can give potential owners a complete picture of the dogs and what they need in the form of a forever home, we home our dogs as if they are our own and have a 99.9% success rate in matching dogs and people up we will never compromise so please do not be offended when we say no which is quite often our rescue is about the dogs first and their needs we home them knowing if they could speak it's about their perfect match.

We are a small team of local volunteers who have worked together closely for many years now many of us have worked for larger organisation where sometimes people lose sight of the most important factors and that is the dogs.

All our dogs are neutered, vaccinated, chipped, wormed/fleaed to us that is just the basics, dogs will get everything they need to make sure they lead a healthy happy life before they leave us, if they need surgery for heart problems, treatment for ear infections, dentals for infected teeth to name a few they will get it - we often organise fund raisers to help pay their vet fees from our wonderful supporters.

Each dog is a special precious soul and will always be the centre of what Starfish is - a Rescue that is all about the dogs.