Rupert is a 6 year old male Greyhound. He is a real character! Rupert raced as Redley Rooster and had over 130 races. Born in Oct 2010 (6 years old now) and on the mall side for a lad, he raced from June 2012 to Aug 2015 and for those three years he knew nothing but to chase a small furry object around a racing track!! His body finally gave out in his last race when he fractured his hock and was due to be put to sleep. Luckily for Rupert GRSB stepped in and he was “rescued”, with just rest his hairline fracture healed and he returned to full health. Rupert has now been in foster for several months he is an extremely loving dog and would dearly love his own home. He is a special boy, but after such a long racing career he is still very reactive around anything that runs, be it cats, rabbits, squirrels or small dogs. He gets very excited when he sees other dogs and can be strong on the lead, but has proved with careful introductions that he can get on with other dogs. 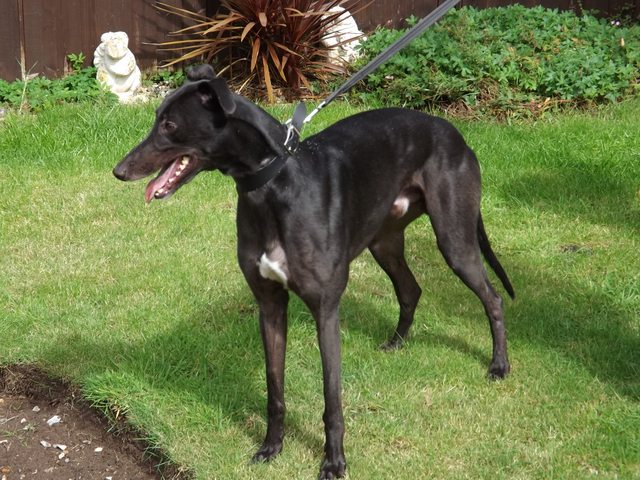 Rupert needs to be homed to a person or family who are experienced sight hound owners prepared to muzzle him on walks and continue to work on his reactiveness. He loves his walks and is most relaxed if he is on a familiar route and can be walked away from other dogs. Rupert has been fostered in a home environment and was clean in the house and loved the sofa, he is very lovable and all he wants is to be able to cuddle up to you and have a fuss. He would make an ideal only dog or could live with a girl Greyhound, he may not be suitable for small children as he is enthusiastic in his greetings! He is happy to be left on his own for quite a while so may suit someone who still works. He would need a garden where he can let off steam and be the “crazy boy” we have come to know and love. No one has told Rupert he is 6 years old and he is a very bouncy active boy.

Because we understand that Rupert is not the easiest dog to home he would be allowed to go out, at least initially, on a foster basis if someone is willing to give him a chance. His foster family love him to bits but he deserves to have a chance at a proper retirement in a loving home of his own. If you would like to know more about Rupert or want to meet him please contact us by phone or email – we would love to hear from you!

For further details regarding adopting a dog from Greyhound Rescue Shropshire and Borders, please telephone Margaret Morrison, Homing Liaison on 01743 874986.