Snowball is a 7 year old male West Highland White Terrier cross Maltese. Snowball is somewhat of a troubled little lad who has had multiple homes and been passed around a lot further adding to his insecurities. His issues are manageable, he just needs confident handlers and measures put in place in order for him to succeed.

Snowball is a neglect case and has had to endure a lot of suffering; as a result he has a lot of deep seated trust issues around humans and touch (especially strangers) and whilst he may ask for fuss initially, he may then decide he does not want it after all and snap suddenly.

His first home reported he was very affectionate with them however would suddenly bite without warning at times. He then fell into some bad hands and was mistreated very badly to the point he was virtually untouchable. He has had a lot of behavioural training since and trust building exercises to get him to this point where he will interact with people and ask for attention but there is a long way to go yet. 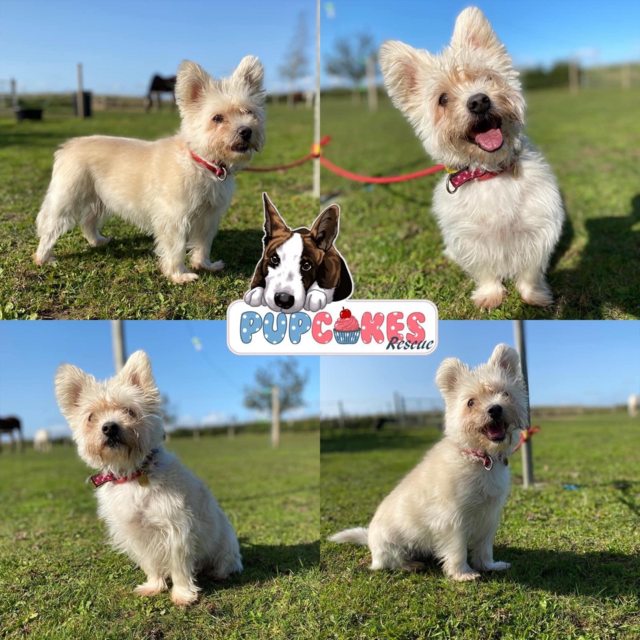 Snowball has at one point been very spoilt over his lifetime and does have a bit of a confrontational spicy side when being told he can’t do something. We do believe this comes from being mishandled previously also. If he displays this behavior we would suggest popping a slip lead on him from the situation so as not to exacerbate the situation. He is a bright lad and we are sure with a bit of encouragement, consistency, and lots of positive reinforcement his behavior and trust issues will improve as they already have.

Snowball gets on well with the dogs here but doesn’t have the best social skills causing him to be a real grump at times. We would recommend a home as a solo dog or with a very calm bitch of similar energy levels. He is food aggressive with dogs so needs feeding separately.

Part of his trust issues centre around vets and dog groomers. (Any kind of handling really) He hates both with a passion and needs to be muzzled for examinations and grooming. He also massively does not like the muzzle so we are conditioning him to it slowly with training. His new owner must be willing to continue with this desensitisation training in order for him to build a healthy relationship with his muzzle and enjoy the nice things life has to offer without putting himself or anyone else at risk.

Overall Snowball is not an easy dog and requires time and space to heal from his traumas at his pace, he may never be a dog who likes to be overly handled but I am hopeful this may not be the case given how far he has already come. There just needs to be reasonable adjustments in place to keep everyone (him included) safe. His ideal adopter would be someone who has no expectations for him early on and is incredibly kind and patient.

We do not think he would allow a visiting person to stroke him so it is unlikely he will be handled at first meets. What needs to happen is that he is moved to his new home via a crate and then the crate is opened once safely in his new house and left. When he comes out of it the crate needs to be taken away and Snowball essentially needs to be ignored until he feels confident to start interacting with people. Upon doing that he shouldn’t be pushed, just reassured with treats and positive reinforcement and once that phase is over it can be built upon slowly. Although visiting people will need to be aware not to stroke him suddenly or try to pick him up.

Snowball’s issues will need ongoing work although he is honestly the sweetest little dog and is no trouble at all here.