Storm is a 4 month old male Greyhound. This lovely boy has a very sad past that he has long forgotten about, found in the terrible recent storms in Spain more or less starved to death, he was found close to dying near some bins, a tiny greyhound puppy who was still wagging his tail and wanted to trust and love. He had been that hungry he had been eating twigs, stones and foil. He had a twig hanging out his back end which he had to be knocked out to have it removed – a bag of bones they were not sure he would make it. We do have those pictures if people want to see but a month on in foster care with lovely Aunty Sue a very different dog has emerged. 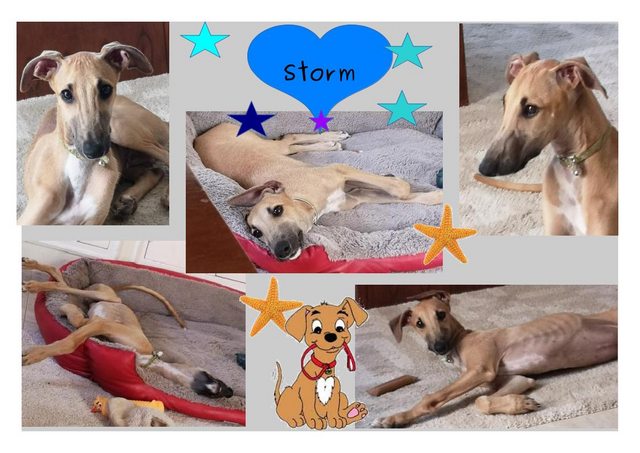 Storm despite his past is a happy, confident boy who has thrived in his foster home living with 3 other dogs. He adores the other dogs, although being a bouncy boy he gets on the little ones nerves sometimes but lovely Max the Podenco plays with him. He is very friendly with people, walking on the lead and off the lead he recall is fabulous probably because he does not want to be left alone again. I was a stranger but he made me so welcome he is not shy. He is used to being left for a few hours with the other dogs, his house training is great and he got the hang of that really quickly.

Health wise he had a terrible worm infestation which is now cleared up, he also had inflammation internally from all the rubbish he had been eating to try and stay alive, he has been x ray and no damage was found just inflammation which he is now recovering from and looking amazing a month on.

The home we are looking for Storm is a home with another dog to play with, he loves other dogs and is so good with them. A home that understands the Sight Hound breeds, Storm has good recall at the moment but this could change as he gets older – a home that has the time for a puppy – time to take him dog training, not leaving him on his own for hours – Storm is fabulous dog with an equally lovely temperament and deserves after his past the perfect match.

For further details regarding one of our dogs please email us at starfishdogrescue@hotmail.co.uk for our application form - we are only a small rescue and we get to know our dogs properly before they are put up for adoption, we work with two rescues in Spain for the last 7 years and also travel to Spain to meet the dogs and assess them before we agreed to take them as we are a foster based rescue - we also help the local dogs in Gloucestershire and also link to a local Pound in Bristol that we help, we do take our time and make sure its the right match and put as much detail as we can in their write up what sort of home will suit that particular dog. All our dogs are neutered if old enough, fully vaccinated, chipped and blood tested - they go out with a full vet history, all homes will be home checked without exception and you will be expected to travel to meet the dogs we never deliver dogs. We are small rescue solely run by volunteers. You can see more of our work on our facebook site and website under Starfish Dog Rescue.
Articles: 704