Tehya is a 10 year old female Staffordshire Bull Terrier. She is in a foster home in Cinderford, Gloucestershire, waiting for someone to offer her a permanent home. Tehya loves to have her people around her, but she has been left for about 4 hours on occasion with no problem at all.

Her foster carer feels she would prefer a home with people who are around a lot of the time, but she would be fine to live with a part-time worker. Tehya needs to be an only dog. 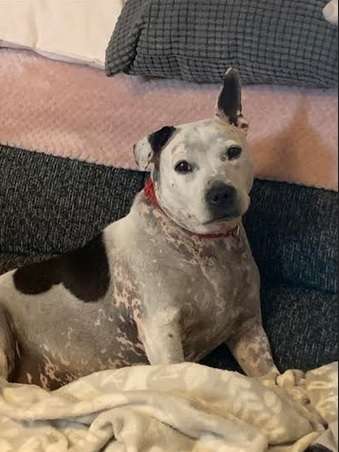 She has high anxiety when approached by other dogs and her first response is to ignore them and then try to avoid them by tucking herself behind you. She has occasionally had a lunge at other dogs if she feels they are coming too close. Her foster carers therefore have tried to keep her away from other dogs.

She needs a home without cats. She will chase cats. She is good with children. Tehya loves all humans, including small ones! She has recently been around two children, aged 2 and 5, and was lovely with them. She does jump up sometimes though, but if children aren’t too small and are used to dogs that jump up, it shouldn’t be an issue. 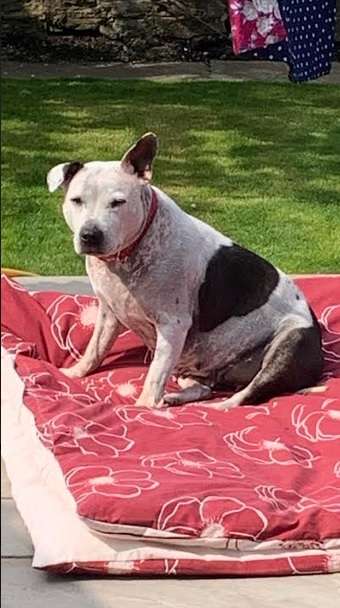 Her foster carers are continuing to try to discourage this behaviour by turning away from her when she does it. Tehya loves to have your attention and will come to you frequently for strokes and fuss. She likes to stand with her front feet up on your chair and just be stroked.

She enjoys a short walk and she loves to sunbathe outside in the garden on her quilt (her fur is a bit sparse on her head and chest so she needs to have high factor suncream applied). She has recently enjoyed a raw marrow bone from the butcher and she gnawed away at it for hours until her foster carer took it off her to give her a break. She does have some toys and will play fetch for a short time.

Tehya loves food and treats. She doesn’t like other dogs. She also doesn’t like going out in the rain, but she does quite like being dried off with a towel and will stand patiently for you to do it. She doesn’t like rolled-up newspapers or cardboard tubes (from wrapping paper etc.).

Somewhere with people around for most of the time, although not necessarily all the time. She doesn’t need company, but she does like it! She would love a short walk each day and a comfy sofa to chill on. She would like a garden because she likes to sunbathe and potter around. Resident or visiting dog-savvy children would be fine. 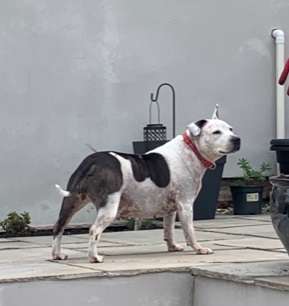 Tehya is neutered, vaccinated, microchipped and has been wormed and flea treated. She has been given a clean bill of health by the vet, after her spay and having some bad teeth removed. Her fur was quite thin when she came to us and her skin was dry and flaky.

This has improved hugely but she is still a bit ‘thin on top’ of her head and on her chest. **Tehya had a bad reaction to the painkiller Metacam, after having her teeth removed. She had awful diarrhoea for several days afterwards. Her adopters must let their vet know that she is not to be given Metacam.**