Tucker is a 14 month old male Golden Retriever. He has come to us via a breed specific rescue after 2 bite instances in two separate homes. They did not feel they had expertise to successfully place him after this and asked us for our help. Tucker is an energetic mildly dominant young dog with no bite/mouthing inhibition who has been allowed to do as he likes without proper boundaries being set or any meaningful training.

If I am brutally honest It needs to be said that Tuckers first home have done absolutely nothing to set him up to succeed in life and gave no consideration to the fact that he would grow into a very big strong dog the future. He has had zero training where it matters and the wrong behaviour has been encouraged. He is unruly, strong on the lead, jumps up, does not accept correction nor direction, has been allowed to guard things and has been taught to play fight leading to him not being able to differentiate play biting and boundaries. 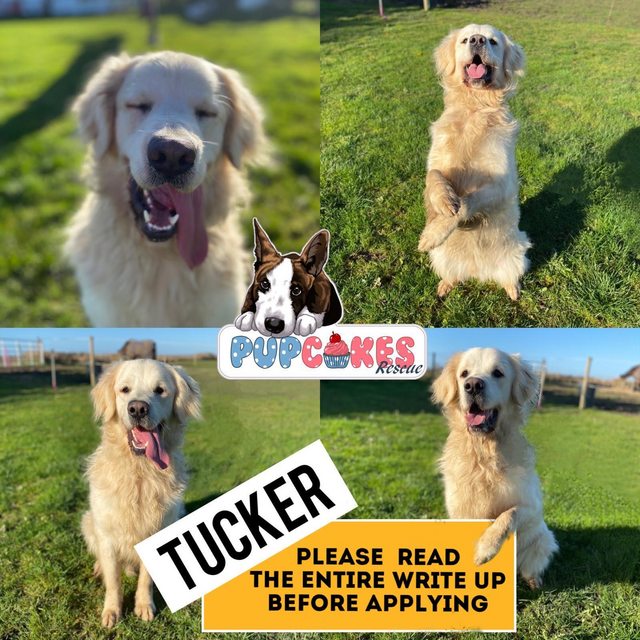 When he got to a year old his first family took him to the vets to be euthanised because they could no longer manage the dog they had created, complaining that his behaviour was out of control and they could no longer cope. The vet discouraged euthanisia and instead encouraged the family to seek the help of a breed specific rescue to rehome him. He was placed direct from his home into an adoptive placement within 3 days of being in contact with a rescue and within 12 hours in his new home began to show some guarding issues over toys which was not previously seen or mentioned in his handover.

Tucker will actively bring you toys and then start growling at you. He will also steal things and do the same. Unfortunately the new family were not familiar with resource guarding and unsure how to deal with it, His signals were ignored and he escalated quickly.

For those who don’t know Resource guarding refers to a dog displaying behavior (growling, snapping, etc.) intended to convince other dogs or humans to stay away from a particular treasure or “resource.” The resource can be food, treats, toys, a place (a bed or favorite chair), or occasionally a person. Due to the fact that Tucker has been taught to play fight he has a habit of grabbing hands, feet, arms and legs in an attempt to exercise control or when he’s over excited. We have had a number of dogs here with this tendency although not all hold as firmly as Tucker. Clearly the natural reaction is to pull away and this may cause injuries.

Obviously it is still technically a bite but there is a difference between a real bite and a “grab and hold.” We don’t think Tuckers adoptive family understood this and understandably panicked causing injury when pulling away. That’s not to say Tucker wouldn’t bite over resource but we have found he can be distracted out of guarding by using swapping techniques and the rescue are happy to demonstrate. He does not guard tennis balls and these are an excellent swap out tool but he does guard other toys and things he steals. We believe the simple way to deal with it is to not give him toys and use a swap out with anything he does manage to steal.

Tuckers guarding cannot be ignored as if he doesn’t get a response from it he will push it further by grabbing hands and feet. It must however be dealt with effectively to insure it does not set him up to fail. Tucker can be incredibly scary when he guards something and 100% has the potential to bite if not managed correctly. We do always suggest with any resource guarder not to leave things around the dog can have access to, tea towels, paper, food packets etc and to be very careful around high value triggers like food, beds toys. Chews and long lasting things should be ruled out as they have high capability to be guarded and we recommend not allowing them on sofas and beds where they are level and higher to you due to the fact that they are more likely to go for your face should they lunge. They can also decide to start guarding the sofa whilst you sit on it. With a lot of space guarders they like to escalate from furniture to rooms so keeping furniture off the agenda helps hugely.

Tucker needs to learn that guarding something has the opposite effect of what he is trying to achieve. Should he start showing any sort of guarding behavior a slip lead must be quickly placed on him with a firm “no” and he must be removed from the situation and put somewhere else to calm down. If the reason for guarding was a physical object it can then be safely removed before he returns, if it is a smaller object he is holding onto then he must be offered a swap out for something of higher value (tennis ball) and again removed from the situation. This may need to be repeated many times before it makes sense to him. Provoking, Caesar pinning and challenging a resource guarder will all end in you getting bitten. The trick is to deal with it calmly and swiftly whilst not reinforcing it and not exacerbating it.

After being returned the first time the rescue then placed Tucker in kennels where he did very well. For 3 months they did not see any aggression from him and attempted to place him again where the exact same thing happened within 3 hours of him being in his home and the family returned him. That’s when the rescue asked for our help and he was transferred to our care.

Tucker does have a lot of positive traits. He is bouncy, friendly and confident. He travels well in the car. He can sit, beg and fetch tennis balls which he gives back very gently and shows no possession issues over. He does not have any separation issues and for the first 11 hours in his adoptive placement he was the perfect house guest. He is fantastic with dogs and has no issues over food. He is housebroken.

Tuckers potentially adoptive home needs to be aware that he is very large at 35kg and he requires copious amounts of exercise. He needs muzzling for grooming and for veterinary exams as both can make him quite aggressive. Tucker has been a good boy whilst under our care. He is very boisterous but has not shown any aggression. It seems odd that his previous aggression was noted within 24 hours of him entering a home yet we have had nothing in the time he’s been with us.

We do feel he attempts to take control of the situation immediately and lay claim to things, his potential adopters will need to be aware of this and ensure he is not able to stake a claim early on. Tucker gets on really well with other dogs here in the play yard and goes on pack walks also. He could live happily with another confident playful social dog as his guarding behavior does not manifest against other dogs. He has a strong prey drive so cannot live with cats or small furries.