Will is a 4 year old male Brittany Spaniel. Will was purchased as a puppy from a breeding farm in Bulgaria but became too boisterous for his owners living in an apartment. They gave him away to an elderly woman who lived in a small village. He was treated for a broken collarbone and other injuries not long after. Then he was given away again to his third home where he stayed living on the outskirts of the town. He became a chained yard dog, living outside. We don’t know how he came to be in the canal, thrown in or fell in? The last owners are saying they don’t know how he fell into the canal near to their home? Will was taken to the vet clinic where he stayed for weeks receiving treatment. He was found in very poor condition with damage to both eyes. One eye was so badly damaged it couldn’t be saved. The other eye was badly infected. After the infection was treated, they operated, but sadly his sight could not be saved and he is totally blind now. He has adjusted to his blindness as many dogs do and is still an energetic and lively boy.

Will is good with other dogs and likes children. He is receiving training to help him walk on a lead, and he is now allowing people to remove his food or touch his plate when eating. He will continue to have training, but as he was often hungry in the past, he hasn’t quite learned yet that he will be fed every day and never go hungry again. He is a social and friendly boy but will need time to be introduced to other dogs. He loves attention from people and shows affection when stroked. Sweet William has been living with his foster Mum in beautiful Cornwall and is certainly making the most of his time there ( and probably enjoying the odd ice cream or two with a side order of clotted cream!) This is what she has to say about him! Despite poor William’s horrendous past, he’s a bouncy, happy, trusting soul who’s always ready for fun! Even though he’s been given little reason to trust people, such is this beautiful dog’s capacity for love and forgiveness, he not only forgives but he adores people and appreciates every kindness shown to him. 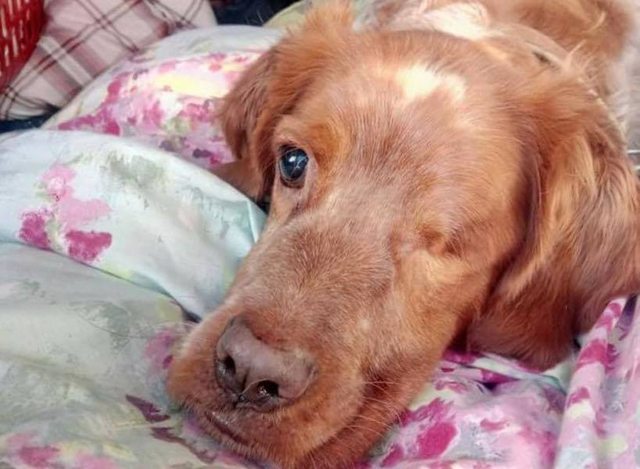 Despite his blindness, William still makes the most of life and his foster Mum says he’s a typical Spaniel, full of joy, enthusiasm and energy, he also relishes the chance to use his great intelligence when he gets the opportunity. William’s character can be summed up in the old saying ‘ hail fellow well met’ as he is certainly congenial, hearty and friendly with everyone he meets. William gets on brilliantly with other dogs and hasn’t shown any animosity to any new dog he’s met although as with any blind dog, it’s only proper to not allow new dogs to take liberties and clamber all over him, but he greets both new dogs and new people with his usual enthusiasm and friendliness. William doesn’t let his blindness stop him from enjoying life now he is safe but due to his above mentioned enthusiasm, he does sometimes get a bit carried away and he can be a tad clumsy, so his forever family might need to move their treasured ornaments to a safe place where the bouncy, happy William can’t inadvertently damage them! 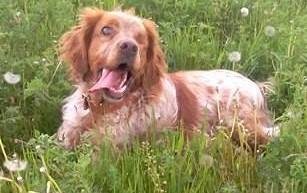 William’s foster Mum has had him off lead in a safe enclosed meadow and William has enjoyed this and as long as he knows where you are, he’s happy browsing around and doing what dogs do. Any adopter would need to bond with William first before attempting this and be absolutely sure his recall was reliable before letting him off the lead. His lead work is a work in progress as it’s doubtful he was ever taught to walk on the lead properly, so any adopter would need to be prepared to work on this. He is strong and William’s foster Mum says he is an energetic puller, so his new family would need to invest in the right harness or training aid as well as the time to teach him what is required. Until William gets the hang of lead etiquette, his foster Mum recommends that his handler is someone with the strength to keep him safe and secure on walks and during training sessions until he learns pulling isn’t the way to go, literally! In the home however, William is a model of deportment! Much to his foster Mum’s surprise, he’s as clean as a whistle throughout the house so although it isn’t unusual for a new dog to have the odd accident during the settling in period, it hasn’t happened in William’s case. William loves nothing more than chilling either on his own, as he can be left for a few hours without incident, or having his foster Mum scratch behind his ears or to stroke his face and chest gently, healing balm to a dog that only knew cruelty and rough treatment in his previous life. 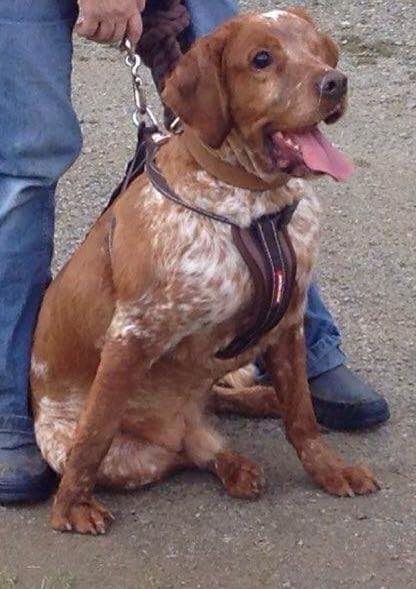 As for the all important dinner menu, William isn’t all that particular, he currently dines on good quality complete dry food and to date, has shown no signs of food aggression. To ring the changes, William is partial to a car ride with his foster Mum, even though he can’t see he still enjoys travelling and he sits perfectly well on the back seat in his special safety harness. If his forever family preferred, his foster Mum thinks he would be quite happy travelling in a crate but she hasn’t found this necessary. Health wise, there are currently no issues according to his foster Mum, William enjoys good health and has also recently been introduced to the joys of a pampering session and he behaved like a complete gentleman to his groomer. Beautiful William has grabbed the opportunity for a new life with both paws and as happy as he is with his foster Mum and current Cornish lifestyle, he so deserves his happy ending and a home of his very own at long last. Surely there’s someone out there that could make a little room in their heart and on their sofa for Sweet William?

For further details regarding adopting a dog from Blind Dog Rescue UK, please contact rehoming@bdruk.org or visit http://bdruk.org/ - please note, we will do a home visit and ask you to sign an adoption contract. Our adoption donation is £255. We don't rehome our dogs to families with children under 10 years old.