Winston is a 3 year old male Bulldog. He is a neutered male who came into the rescue several months ago as an unclaimed stray. Due to Winston’s extreme shape and breeding, he does suffer from mild elbow and hip dysplasia. When Winston first arrived his breathing was also shocking: he could only walk for 15 minutes before becoming so out-of-breath that it was putting his life at risk.

On initial examination we were all worried that this little man was going to need hip, elbow and airway surgery to be able to live a healthy life. As these surgeries would require Winston to be as fit as possible (as they are all hugely risky) we needed to give him the best chance possible. 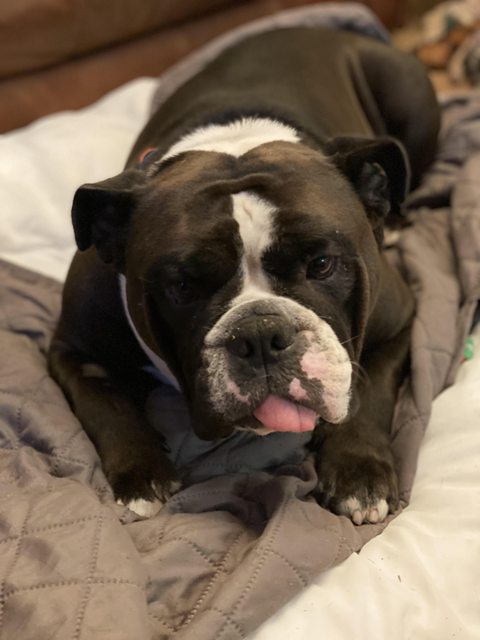 Winston has amazed us all! By becoming leaner and fitter, his breathing has improved so much that he now no longer requires airway surgery and to top it all he can now walk for up to an hour with no pain!! This means he also currently does not need any surgery on his elbows or hips. It is very important to understand, however, that even though he does not need elbow or hip surgery now, this is not to say that he will not need it later on in life as arthritis sets in. It is absolutely vital that any new owner that takes Winston on will have to keep his fitness and diet regime up because they’re the only things that will keep him off the operating table.

Now as lovely as Winston is, he will be a super-expensive dog to own; anybody interested in taking this boy on will not only need the right dog-ownership skills and be a good personality match, but also the right financial match. Total minimum monthly cost £311.51, all of these are non compressible costs, especially the insurance if or should I say when his elbows go you are looking at £2500-£3500 per elbow and that is without complications or aftercare. For aftercare he will need physio session at up to £90 a session and further hydrotherapy to rebuild the muscle at £30 a session – and the rehabilitation can take months. Again: hip surgery is £5000-£6000 per hip so insurance may seem expensive but when a Bulldog breaks they are not cheap to fix! Winston has an extreme body shape and this means he is more prone to these going at a young age. 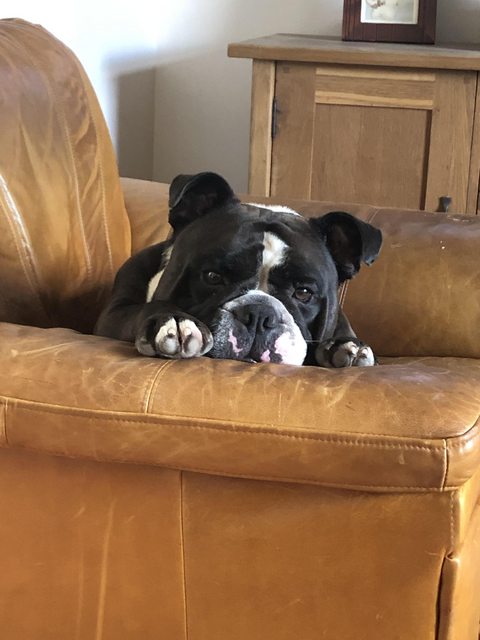 Winston is an active Bulldog. He likes to walk for a good hour per day and while he is great with other dogs and would be happy to share a home with another dog, they would have to be a dog that will put up with his bullish personality! Winston likes all of the attention and is not shy to push a dog out the way to get it!

As an example: my own personal dog is happy to put up with this while I put him in his place and then go back to cuddling her, while a French Bulldog we’re also fostering gets extremely cross about it.

Winston is great with children, however due to his size and the fact that he feels he is a tiny Chihuahua he would only be suitable to go with children over the age of 11 (please note: we will NOT compromise on this). He is great with cats, but will have a go back if they attack him for no reason (as one of the rescue cats is prone to do). He also has no interest in cows, horses, pigs, donkeys or sheep! 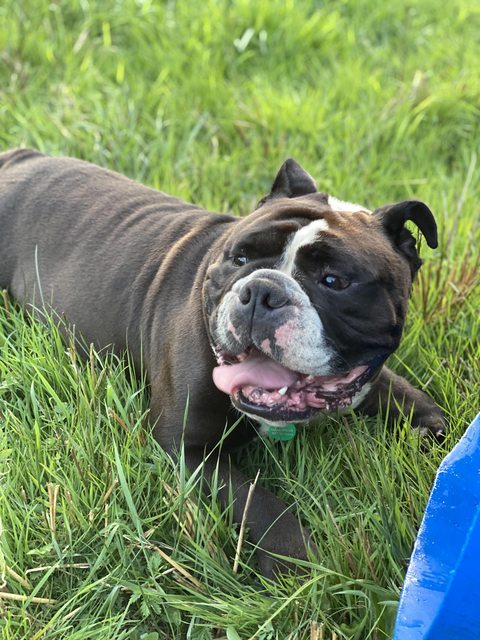 Winston is great in the car, great off-lead and good on-lead most of the time although he gets very excited and pulls like a steam train at the very beginning of a walk. Winston is good to be left up to 4 hours and absolutely adores men.

Winston is, as is common for his breed, extremely stubborn and willful: he hates being told off and will initially give you a teenage-style gobby rant, but if you are firm and put him into a time-out, he will sulk for about an hour and then come very sheepishly to say sorry. As with any Bulldog, if he feels you are weak he will walk all over you!

Winston is not a human, he becomes very overzealous and naughty when treated like one, so his new owner must treat him like a dog as he thrives this way. He would also not be suitable for an all-female household as he just adores men far too much.

All potential homes will be thoroughly home-checked and we will be carrying out financial checks on potential adopters to make sure they really can afford a dog like Winston.

Many people reading this will think this is over the top, however Winston has come a long way in our care and we want his improvement to continue and we want him to live a long, happy and healthy life. At All Animal Rescue we strongly believe that animals are a luxury and not a right!

We see far to many animals coming into our rescue because their owners can’t afford them and their choice of pet was ill informed, or worse, purchased on a whim due to being fashionable.

We do not sugar the pill: we tell you how our animals are on their worst possible day and the real cost of owing them; if you can cope with that, the rest of the time will be a breeze!