Yeti is a 10 month old male Cockapoo. He seems to be following the typical trend of this beautiful cross breeding; he has been surrendered into rescue due to resource guarding behaviour and biting. He is a teeny tiny complex little lad who doesn’t fully understand why he’s doing what he does, but the behaviour has subsequently become ingrained after many months of repeatedly being enabled. 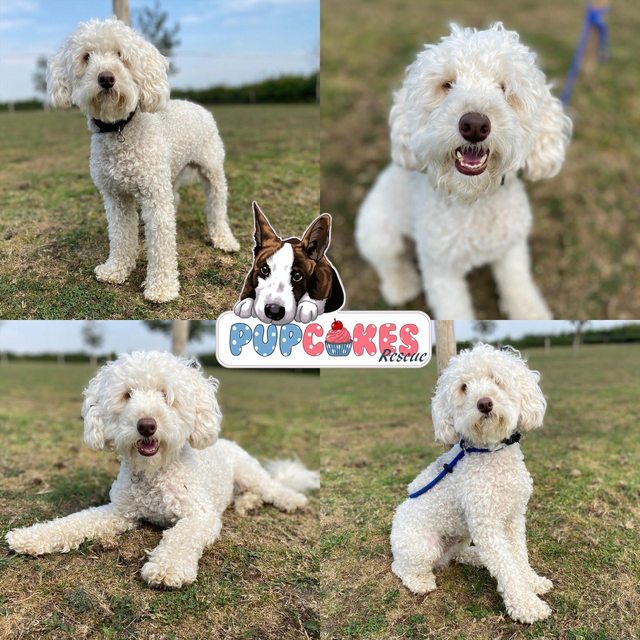 Yeti thrives on structure and routine; he does not do well with constant aspects of his day to day life changing, being exposed to excessively busy environments or multiple unknown people being introduced to him without sufficient caution being in place. His previous homes have tried to manage his behaviour but understandably found it very hard and asked us to take him under our care.

Yeti is a resource guarder and has bitten on a few occasions. For those who don’t know Resource guarding refers to a dog displaying behavior (growling, snapping, etc.) intended to convince other dogs or humans to stay away from a particular treasure or “resource.” The resource can be food, treats, toys, a place (a bed or favorite chair), or occasionally a person.

In Yeti’s case his toys, the sofa, his space and random objects were all guarded. He does also guard things that you drop on the floor IF he’s allowed to get it. However if you correct him with “leave it” before he gets the item he will leave it alone without problem. He will not leave his toys if asked. He is learning slowly that guarding things has the opposite affect of what he is trying to achieve. This training will need to be continued if Yeti is to succeed in his new home.

Yeti has had 2 homes prior to coming into rescue. His first home got him from a breeder at the age of 8 weeks. They were lovely people but did not understand the behaviour nor understand how they were repeatedly enabling it. They spoiled him quite badly and then were too scared to correct him when he challenged them. He started by getting hold of his toys and not allowing them to take it, when this was ignored he escalated it to stealing household objects and stuff he found on the ground and trying to get them to remove it from him so he could intimidate them.

He then started taking over the sofas and growling and snarling when they came near and began escalating it to space when he held his human dad hostage on the stairs and made him leave the house via another exit. Unfortunately they were too scared of him to address and manage this safely so the behaviour escalated. He was then returned to the breeder and sold on again to another unsuspecting family without any mention of the behaviour and history repeated itself. Yeti’s guarding cannot be ignored as if he doesn’t get a response from it he will push it further.

It must however be dealt with effectively to insure it does not set him up to fail. Yeti can be incredibly scary when he guards something and 100% has the potential to bite if not managed correctly. He does not give warning and where he is comfortable in a situation initially he may suddenly decide he is not after resulting in him snapping suddenly. He is an anxious puppy who asks for touch and reassure when out of his depth but will suddenly without warning correct you for touching him.

The trick is not to overhandle him nor give him the chance. This is one of the ways the behavior has been enabled. Do not reassure him when he’s needy and creating. Give him space until he has calmed down and when he is calm ask him to approach you and offer him gentle praise, if he snaps quickly remove him from the situation with a slip lead.

Yeti is incredibly spoilt and incredibly vocal. He vocalizes to get his own way and this has worked. Be prepared for a few sleepless night when he is initially settling as he will cry when left. He has not shown evidence of separation anxiety here though and does settle down eventually. Since being under the care of Pupcakes, Yeti has been extremely friendly and social with dogs and people alike but he may change on entering a home environment that he comes to recognise as his home.

Yeti gets on well with all of the dogs in residence here but can be very humpy and in their face. This has calmed slightly since neutering but not all dogs appreciate his approach. He is wonderfully submissive and accepts correction well so would do better with a friendly patient canine companion of similar energy levels. He plays beautifully and we think he would be like to share his home with another playful companion of similar energy level but alternatively could live happily as a solo dog.

Yeti is smart and trainable and would greatly benefit from attending future training classes with his new human to help him become a calm, balanced dog and also to help cement a good relationship between him and his person.

Yeti is house broken and non destructive in the home but does scent mark upon initial entry. Again this may calm down now that he’s been neutered.